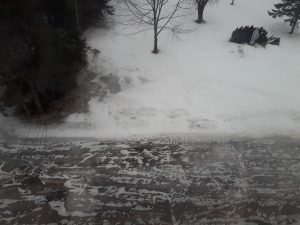 Ice outside the front door.

Thursday 1st. We’ve learned of the passing of someone who had helped Father Clovis produce apple juice over many seasons. The world she closed her eyes on was the better for having known one so gentle.

Friday 2nd. In the night, a bit of ice slid down the steep barn roof. The moon was barely visible through the clouds. A big truck’s faint roar came from the 126. This morning, we celebrated the Lord’s Presentation, which was like a glimpse of the light and awe of Easter to come, with guests, some of whom had never set foot in our scriptorium before, the scriptorium being where we begin, and light our candles.  Bede went with Glic to pick up our new Kia car, a hybrid cross-over, model Niro 2018.  The blizzard they drove back in was a good test of a number of the features of this model.  Father Graham went away for a week’s retreat with the Soeurs Hospitalières de Saint Joseph in Bathurst.

Father Roger cooked the dinner, as he does alternate weekends.  While Graham is away Roger is doing the solo singing at Lauds and Vespers in addition to Vigils which he usually does.  But, at None today, there was a dirth of singers so we had to recite the Office.

A guest commented that it seemed to have been snowing all week.  Tonight it is supposed to change to rain!  Mother Alfreda is the abbess of the sisters across the street.  Her summary of the weather forecast was: “Snow upon snow upon snow.”

Tuesday 6th.  Brother Stephan was in discussion with a farmer who would be interested in leasing our fields when we cease milk-production.

Wednesday 7th.  News from Father Graham that he was going to be delayed an extra day in Bathurst on account of the snow.

Brother Glic was doing an important job on cleaning the filters and bleeding the heating units.

Thursday 8th.  The priest from Prince Edward Island, who always brings us a big hamper of island produce returned there today.  A man who stayed rather longer than usual because he was writing a book also left today.  Father Graham remained wedged in Bathurst because of the snow.

Friday 9th.  The abbot announced in chapter that the Abbot General had accepted his resignation, to be effective from March 1st.  We were rather surprised by the short notice.  Father Graham was back at the milking in the afternoon.  The abbot started moving his stuff out of the abbatial suite.  He says he has been given three weeks to sort out the accumulated chaos of fifteen years.

Saturday 10th.  Feast of Saint Scolastica.  Father Graham was spotted test driving the new car in the snow.  We guessed he wanted to show off its new licence plate.  Br. Glic had some shopping to do in Miramichi.  The days are getting noticeably longer, meaning the snow flakes are visible later into the evening!

Sunday 11th. It was the abbot’s turn to celebrate the Sunday Mass.  As the daylight grew stronger, the snow had almost stopped, snow-blowing was going ahead full force, somebody was walking about, probably on snowshoes, on the lake and Glic was fitting new candles at the altar in time for Mass.  We were entertained at lunch by music from an Irish trio called “The Priests” – because that is what they are.  Some of it was exhilarating settings of liturgical bits, like Benedictus and Te Deum Laudamus, while some of it was decidedly Irish, like Phil the Fluter’s Ball.

The technician came in the afternoon to do a mid-season check on the heating system, which had been doing a bit of gurgling and one or two units were not producing much heat.  It still has time to be tested, because the forecast for a couple of nights hence is for minus 21 degrees Celsius.  Plus, not to be overlooked, it snowed all last night and most of the day today.

Monday 12th. Dom Bede and Brother Steve managed to see both Brother Henry and Sister Jean Marie in Moncton today. Places in chapel were changed slightly as someone new, Edmundo, arrived to begin monastic life with our community. He got a stall on the west side of the chapel.

Tuesday 13th. Brother Glic set off for Saint John once again, but under sunnier skies this time. En route, he saw a UNESCO road sign and wondered if there was a site with beautiful scenery tucked behind the trees and rocks somewhere. No. It turned out to be Stonehammer, a UNESCO Geopark of interest purely for its geology, and its fossil sites.

Wednesday 14th. Simone has put some preserves up.

In Chapter this morning, Brother Edmundo was present. It was striking to have someone join us there, around our round table. The Chapter room has part of the library in it, as well a few icons, one being the hand-painted icon of Virgin and Child which came to us through our late Brother Marcel, a Quebecer.

Friday 16th. The temperatures outside were well above zero today, and with this, the farm cats were looking more regal and masterly than they have done as they prowled outside.

Some technicians were in to look at temperature sensors in the milking parlor and milk house. There is more than one sensor, or thermometer, in more than one spot and it is necessary to know both how cool the milk is, and how hot the wash is afterwards in the pipes. In such a quiet environment, people dropping by is striking, somehow. These fellows were getting ready for a training seminar in Kansas, soon. I told them to enjoy the food.

Dom Bede has begun setting up an office in the middle of the second floor for his work on our liturgical books, which he has gone a long ways in renewing.

Saturday 17th. Our Christmas week newspaper story continues to draw remarks, and has now decided a women’s volunteer group to bus it out some time for a tour.

Brother Edmundo’s name has been added to the little lists for liturgy and choosing music for Sunday lunches. These lists have little magnets you can move around to indicate who is doing what. Seven plus one makes eight names, now.

Sunday 18th. Having played the Saint Matthew’s Passion for us several times at lunch, today Brother Stephan chose a You Tube of the Saint John’s Passion, which was very nice. Steve is not the only monk we know for whom Bach is at the absolute center, as regards composers. I recall one monk-musician, his CD collection was: Bach. One pop CD…of Peter, Paul and Mary.

Monday 19th. Having a change of superior close at hand is a unique sort of moment; time is suspended. But at the same time life is quiet, and rolls along. God’s power is felt, in an unknown future.

Tuesday 20th. Outside, tonight, our seniormost Tom Cat was sitting a distance from the barn, looking out over the darkened valley. Inside, the other cats received some food during night milking.  There is a steel barrel filled with cat food there—well-sealed. The cats get a big scoop at a time, plus fresh milk of course, to supplement what they get from hunting.

Wednesday 21st. The reporter who wrote recent articles on the monastery, so well received, had not been in the Moncton paper for a while, I thought perhaps she had moved on. Now she is being published again and one understands what happened: they sent her to cover the Olympics in Korea.

Thursday 22nd. In town, the snow banks along the road have hardened and are sooty, as they are each February. They look a little like stone upcroppings, and in the quiet of winter seem to hide some secret, sometimes, seem to hide nothing at other times; no other season.

Friday 23rd. With great simplicity Dom Bede gave Chapter preparatory to his resignation taking effect next week. He spoke of the growth he had seen in the community during his fifteen year tenure, as well as of changes in the composition of the community from 2003 until now. In a very few words he shared his hope for us, and his perspective on today.

Saturday 24th. A small but striking array of guests sometimes appears at Offices now; like Compline, where there is usually only our lumberjack friend joining us. Their presence is like a silent song.

We learned this week of the existence of a lovely new oceanside retreat center on Prince Edward Island: Our Lady of Hope. Seems someone left behind a behest upon passing, asking that such a center be built. Good news for our area, where retreat centers are not numerous.

Sunday 25th. Father Roger mentioned that someone from Fredericton has volunteered to do some work on the grounds here this spring, specifically the area around the Sacred Heart statue. She is not an admirer of our hosta plants, and Roger is so we’ll see how this works out. I won’t drag my mother into this, but she has hosta convictions of her own.

Monday 26th. A hoof trimmer drove in for the day, and managed to treat fifty cows’ hooves, working straight through lunch time. Some hooves have to be trimmed. Some hooves also have bacterial infection. The fellow was impressive and quite skilled. There can be a kind of free-spiritedness to farming or being a farm type.

Tuesday 27th.  At Mass this morning, for some reason there were just two people, a couple who have known us a long time.

Wednesday 28th. Mild weather meant a snowmelt shower off the eave. The crows were ‘on manoeuvre’; loud.

Our handyman, Patrick, has been refinishing the base of the wall in the guesthouse, going into the Chapel corridor. This morning, an electric heater’s glow was keeping the wall dry, next to the glass door which leads into our backyard.