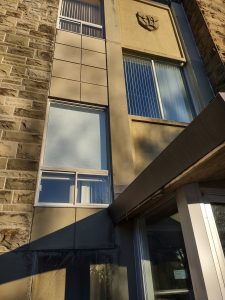 Thursday 1st. As scheduled, Anna Stuart, a resource person,  was here for a few days.

Friday 2nd. The technician was by again to touch up the  heating system, whose 40 geothermal wells in our backyard have served us well over the years.

Sunday 4th. At lunch, we listened to interesting vocal arrangements of Christmas songs by the Central Hall Community Gospel Choir, based in Southampton, England.

Monday 5th. At 4 PM Father Wesley Wade gave us an opening conference, as we began our annual retreat. Father Wade is a Priest of the Diocese of Bathurst, and has been visiting the monastery for many years. One recurring theme in his conferences (the first French-language ones we have had in a while) is the Christian’s life’s work of discernment.

Tuesday 6th. Brother Paul Richards, of the Abbey of Genesee in New York State, arrived in time for Vespers with us.

Thursday 8th. At a festive lunch, we w

ere able to talk with Brother Paul and learn about his monastery, and all the monasteries in the US, including our closest US neighbour, Spencer, Mass.

Friday 9th. Father Wesley gave his final conference this morning, having helped us in the course of the week to see our way life from his perspective. He asked our prayers for his diocese, and reminded us that three diocesan sees in New Brunswick hope to receive their new Bishops one day soon: Moncton, Edmundston, Bathurst.

Saturday 10th. Our display line in the refectory received a first Christmas card this week, from the village of Rogersville. Brother Leo receives quite a few cards, and used to send them by the dozen.

Sunday 11th. Community calendar events have been completed for the year, but there is note of one event for 2023, a summer retreat given by an Australian Abbot.

Monday 12th. As temperatures dropped, the ice froze hard and audibly, with a boom.

Tuesday 13th. By mail we received a transcription of a  document which seems to date from 1919, by Calvaire founder Dom Antoine Piana. Found in the family homestead in France, the document treats informally of the foundation of our monastery, its life and work, the local culture; as well as the history of Acadia, with a special word on both the Trappistines of Assomption and another local congregation les Filles de Jésus. The first serious snow of the season got underway this evening.

Wednesday 14th. Brother Paul tried his hand at plowing today,  a wet snow. It went well, and has remained white outside. Christmas cards for monks to send if they wish were set out in the scriptorium. They were produced at New Helfta Atelier, near Genesee Abbey.

Thursday 15th. Dom Innocent has made a bound edition of the house reports from all monasteries at the recent General Chapter, providing an update on monastic life in the world.

Friday 16th. Christmas cards to the community arrived, from friends old and new, and chefs, and auto part suppliers. Each year, the variety of greetings are a lesson regarding the ways our community is loved.

Saturday 17th. A new restaurant has opened in town, and it is called Western Winds Barbecue Barn.

Sunday 18th. This year, there is a creche in the refectory, to Brother Leo’s surprise, and delight.

Monday 19th. This month marks 20 years since Father Bede first set foot here. One of the wheels of our big tractor blew this week, and had to be replaced.

Tuesday 20th. In chapter, Brother Paul spoke to us about his monastery, Genesee: it was one of the foundations Gethsemani Abbey made in years when vocations were very abundant, and it sounds like a very nice community. Their Church was built of stones brought from a nearby stream. Their great success as an industry, breadmaking, started unintentionally, when a US veteran / monk made some bread for the other monks; others tried it, it caught on, demand soared, and the community’s daily schedule was built partly around the bread-making. 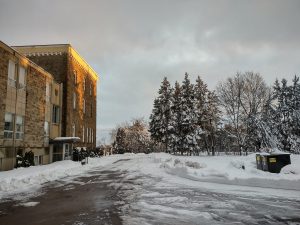 n wintertime, but somnolence has not diminished his sense of humor.

Thursday 22nd. Our refectory book, Madame Fourcard’s Secret War, is one of several World War II books we have heard read in recent years. And yet, still more history exists to be learned for that period. So far, the book also offers an interesting portrait of the communal nature of spy work.

Friday 23rd. Guests are few this time of year, but happy to be here.

Saturday 24th. For lunch today, we had Ukrainian dishes such as cabbage rolls and perogies and Kutya. All was still outdoors late this afternoon, except for squirrels subtly moving from tree to tree.

Sunday 25th. After a nice Christmas Mass yesterday evening, we had our second Mass today, and prepared to tuck into Brother Paul’s cheesecake at lunch. 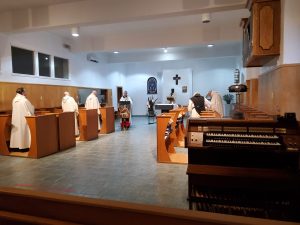 Tuesday 27th. In Chapter, we looked back at how this year’s Christmas liturgy went. Dom Innocent observed that Christmas Masses went well, all things considered. Somewhat unusually compared with other Christmases, night Mass did not draw any people who were new to us.

Wednesday 28th. As Father Bede observed, Christmas falling on a Sunday has set up a chain reaction of sorts, bringing to light some  antiphons for Offices which we rarely encounter.

Thursday 29th. A young family did some tobogganing on the hill which descends to the grotto.

Friday 30th. Wood shavings arrived, to prepare the chicken barn for the feet of new chicks.

Saturday 31st. A longtime retreatant is back to share some Christmas with us. At Lauds, we learned of the passing of Pope  Benedict, transforming our experience of this last day of 2022. At Mass, there was a feeling of love; for Benedict, and thanks to Benedict.