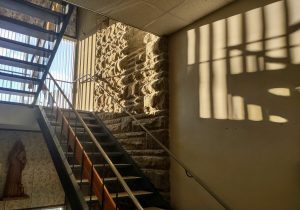 Wednesday 1st. Cook Simone is making some meat pies, to set aside for Christmas; two varieties.

Thursday 2nd. Bede was looking at some of the heating units today. Some parts of the monastery are warmer than others, like the Chapel.

Friday 3rd. With rain, and outside temperatures just above normal, a December salamander made his way up our back door this morning, tentatively

Saturday 4th. Brother Leo was remembering winters of his childhood; his father disabled, the family poor, Leo walked four miles to get the monthly slip for aid from the Parish, then to the store for the groceries accorded them, then got a drive home. 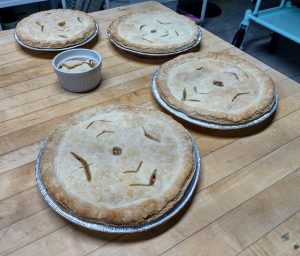 Sunday 5th. A young family came to the Chapel for None with us.

Monday 6th. A brief meeting was held to decide on this year’s Christmas schedule, which will closely resemble other years. Windy warmer nights, have meant leaves, and seed pods flying about.

Tuesday 7th. In chapter this morning, Dom Innocent commented in light of Advent, the last chapter of the Rule, which encourages digging deep, and reaching for greater conversion. He reviewed the upcoming schedule with its special timetable, thanks to Christmas eve. We discussed initial use of the new French Missal, and the accompanying booklets for concelebrants: off to a good start.

Wednesday 8th. The Solemnity of the Immaculate Conception arrived with joy, a type of spiritual homecoming.

Thursday 9th. Father Bede has a bowl of chocolates on offer at the reception desk. New blinds are being installed in the guesthouse, to replace the vertical blinds, which have certainly served their time.

Friday 10th. As people rejoin us for prayer, a year and a half having at times passed, they are a bit surprised to see Brother Leo as active as before, a few weeks before his 95th birthday.

Saturday 11th. Guestmaster Bede witnessed some new guesthouse cleaning underway. This evening, he and I were trying to remember where the exact center of Rome’s historic center (the ‘centro’) really is. 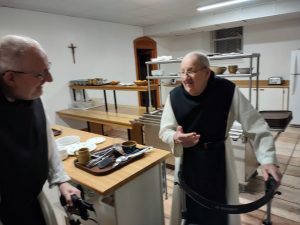 Sunday 12th. At lunch, we listened to Ralph Kirkpatrick’s 1960’s recordings of Bach.

Monday 13th. Our small numbers mean that monks sometimes have to adapt to different roles during the liturgy. The other day, a monk served Mass for the first time since he was a teenager.

Tuesday 14th. The clouds were dramatic and beautiful today, sun breaking through, as Rogersville experienced high winds. We received two nice poinsettias. A list was posted of duties such as presiding or preaching for Christmas season Masses.

Wednesday 15th . Christmas cards to the community have begun appearing. A Priest friend’s Mom also sent us a little box of baked treats. Someone else we know sent a personal letter regarding how this   Christmas seems to them. Our friends are good to us. Brother Leo receives quite a variety of personal cards.

Thursday 16th. The Sacrament of Penance is a bit more in demand this time of year. Cook Simone is a-whirl with baking, and tucking away the goods. 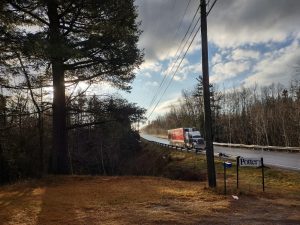 Viw from the entrance to our drive.

Friday 17th. The exterior bells are still working, but have been ringing less consistently for the Angelus or for Mass.

Saturday 18th. Work is ongoing on the new guesthouse window blinds, which give a new look to things.

Sunday 19th. The Christmas tree is up and is in the process of being decorated. Steve went over, had a look, and saw that it was a real tree. Monks of many days gone by would cut down a tree in our own woods for Christmas…not always the prettiest.

Monday 20th. Brother Stephan had occasion to plow some snow this morning, breaking the cycle of green.

Tuesday 21st. In Chapter, Dom Innocent spoke about the year of Saint Joseph, which ended recently, and the Amoris Laetitia Family year, which will end this June. We also reviewed matters having to do with home and upkeep here, indoors and out, and of course a bit about Christmas Day. Father Roger watered some of the many indoor plants this morning. Monks heard from friends and family, and cards and gifts continue to arrive.

Wednesday 22nd. Icy conditions arose, just as one of the monks had to head south in the Province. He was delayed by a road closure on the highway we rely on, which runs past the monastery, the 126.

Thursday 23rd. Our one guest for christmas arrived, and brought a baked gift, which guestmaster Bede carried across to leave at the superior’s door.

Friday 24th. We had singing practice in place at choir, as soon as Lauds ended. Unusually, English morning Mass was held today rather than Saturday, to give the Miramichiers a chance. Brother Stephan worked on our bells outside. For most of the week, the secondary bell has been in use, a higher note. By evening, the mood in the house changed, as hearts centered on Christ’s birth. The 7 P.M. Mass was prayerful, and all were happy to tuck in afterwards. 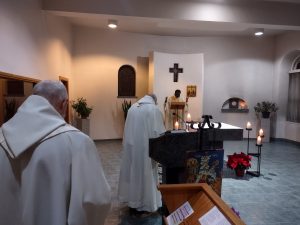 Saturday 25th. Celebrations resumed with Vigils, and soon it was our second Christmas Mass, bringing the day to life in a new way. Turkey dinner was excellent.

Sunday 26th. Brother Leo learned of the passing of one of his oldest chums and neighbours from Memramcook, yesterday. Bede chose some festive songs for lunchtime listening. 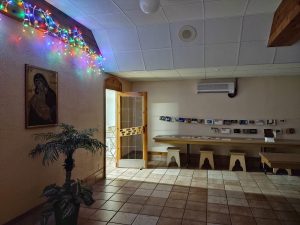 The Refectory at Christmas

Monday 27th. The third floor got a good cleaning today. The common lavatories there still have the old wooden floors and stalls, and high ceiling, having missed the wave of 1990’s renovations. An electronic replacement part is on order for the main exterior bell. Meanwhile, the small bell is not able to carry out all the usual functions, but we are on time, pretty much. Our one Christmas guest departed, and now guest master Bede sits contemplating mostly empty  pages in his book of bookings.

Tuesday 28th. Someone came into the Chapel to pray alone in silence, this afternoon. Bede received some olive oil for the sanctuary Lamp. Our Christmas chocolate stock gradually decreases, but stocks are high.

Wednesday 29th. Despite waves of cold, little insects were flying outside today, sign perhaps of how mild the last few months have been.

Thursday 30th. Before vigils each day, Father Roger prepares the refectory for breakfast, so that when monks eventually descend they find cereal, cheese, and today a bit of sliced melon. Year-end inventories are being prepared for farm, and for the store. Little by little, the store sells copies of our history book, and the Rogers TV special on disc, and our Father Camille’s 1974 biography of Msgr. Richard.

Friday 31st. Twin bells were heard once again, signalling a technical success in our bell tower.