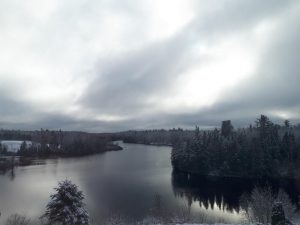 Tuesday 1st. In Chapter, Dom Innocent commented the Rule’s teaching on the artisans of the monastery, a subject that sheds light on monastic life all around. Edmundo joined us in Chapter. As the new barn reaches completion, new lights can be seen there at night, eight to the side, along the building, with additional lighting on the silo. This looks like the siloes of old, but includes scales for weighing the grain inside.

Thursday 3rd. The second silo was delivered today. Scheduled delivery had been delayed, previously. The Province doesn’t permit transporting something like that on the highway when winds are high, which they certainly were. In Moncton, Brother Henry emerged for some routine tests at the Dumont Hospital today, sporting a touque and of course a face mask.

Friday 4th. Although the store is open, Bede finds sales have slowed down out front.

Saturday 5th. Workers were in again today to try to hasten completion of the new chicken barn. A great deal of wind and rain arrived in place of snow.

Sunday 6th. The roof was leaking on the third floor, leading Bede to recall the woes of Mount Saint Bernard’s roofs, in Yorkshire. At lunch, we listened to a CD of our sisters of Arnhem, Netherlands, for the first time in a while. The gentle rhythm sounds better than ever.

Monday 7th. Some repair people were in to look at the leaky roof situation. For now, things are dry inside and out.

Tuesday 8th. Brother Edmundo began his postulancy today, and so is wearing a grey smock in choir. At our festive lunch for the Immaculate Conception, we discussed our refectory reading, clans of New Brunswick, the history of the surrounding area, and more besides. Combining midday Offices before lunch changed the rhythm for the day.

Wednesday 9th. In order to sort out variations in functioning, Brother Stephan measured the temperature in the heating system pipes, which run under the corridor ceiling. The roofing repair crew set to fixing the leak today. As they arrived, they were in a merry mood.

Thursday 10th. We have received a few gifts of plants, also chocolates. At Mass, fewer are attending than were a few weeks ago. This could have as much to do with the season, as with social changes.

Friday 11th. Bede made his way to the Miramichi for an appointment, this afternoon. The river was open, and flowing nicely. 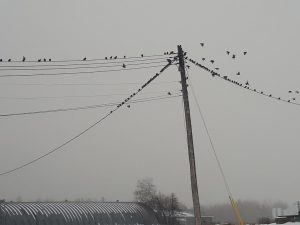 Saturday 12th. The decorations for the season began to appear in our refectory, today. Brother Leo was asking himself today, which is greater, Christmas, or Easter? Putting aside other answers, he reflected that Christmas has the most joy, while Easter means having the most faith.

Sunday 13th. A soggy, slow snow overnight did little to raise spirits though as always, the Sunday Mass was nice. Dom Innocent went south to see Brother Henry and give him our greetings. Henry was eager to hear how things were going in the monastery.

Monday 14th. There is a bit more interest in receiving the Sacrament of Reconciliation here, leading up to Christmas. This afternoon, Brother Stephan was practicing songs with a second musician, in the Chapel, perhaps this music will be part of holiday liturgies.

Tuesday 15th. Our cats have left paw prints in the snow and ice. In Chapter this morning, Dom Innocent commented the Rule’s teaching on receiving novices in light of the monastic path as a lifelong process which changes us.

Wednesday 16th. Father Bede received cases of honey for the store today. Honey, and five day candles keep people coming back, and today, unusually, Brother Leo met an old friend of the monastery, who was stopping by on a break from work to candle up.

Thursday 17th. The wooden crèche has been set up, just at the top of the stairs into the guesthouse.

Friday 18th. A coat of ice as from a mist covered trees and roads this morning, but didn’t seem to dampen spirits in town. With Christmas a few days away, we plan on having both evening and morning Masses, just as every Christmas. We began a new refectory book today, the Nazi Officer’s Wife, the wife in question being secretly a Jew.

Saturday 19th. Father Bede set up the lovely icon of the Annunciation in its stand next to the altar. The icon stand holds a candle in place in front of it.

Sunday 20th. At Mass, we prayed in a special way for those affected by the global health crisis. The simplicity of the mysteries and the God celebrated at this Mass seemed to speak of a better day approaching soon.

Monday 21st. We had a council meeting this morning, looking ahead to post-construction in our one industry: poultry. Brother Leo’s niece was by for a visit this afternoon. A happy rediscovery. A water faucet outside has begun flowing on its own, guess the cold affected it. This afternoon, Dom Innocent got in to see Brother Henry in a newly busy Moncton.

Tuesday 22nd. For Christmas, Innocent suggested we have Vigils a bit later, 4 am., in order to have a bit more rest that morning.

Wednesday 23rd. The commissioning of the new poultry barn, which involves verifying the functioning of the various systems, is underway. In Moncton this afternoon, Brother Henry was enjoying some television, and we shared a few laughs. Father Roger began cooking our Christmas meal, cooking the meat overnight, as notices appeared upstairs concerning the holiday timetable. 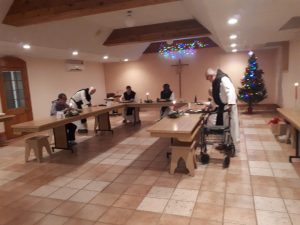 Thursday 24th. After Vespers, we descended for a first Christmas meal together, with our Christmas tree now up, with its bows and lights on. At seven we had Christmas Mass, with some special folks joining us; a few, and as seems fitting for Christmas, a new face or two.

Friday 25th. Bede said at lunch, “we had two nice Christmas Masses.” It was a Christmas with a lot of heart.

Saturday 26th. The De Angelis Kyriale is being used for the singing in all these big Masses. In the beauty of its musical settings, this Kyriale seems always to have something new to say.

Sunday 27th. Brother Leo was especially excited that the Feast of the Holy Family was at hand. This week, he has been recalling Santa Claus moments gone awry in the Memramcook of old, including a Santa scrap at the corner store.

Monday 28th. Christmas Octave Masses are presided in turn by different Priests each day as, quietly, Christmas continues to reach us.

Tuesday 29th. In Chapter today, Dom Innocent asked us to reflect on one or two elements of 2020 that seemed significant to us (Covid aside!) in order to share thoughts on New Year’s Day. He also gave some indications regarding the liturgy, and said he plans to visit Henry soon. The lake was booming today as, temperatures having dipped, the ice thickened. Innocent and Edmundo worked cleaning up the interior of the new barn.

Wednesday 30th. In some encounters I’ve had, people seemed more surprised than usual this year end that, that’s it; the twelve months are really through.

Thursday 31st. A sunny afternoon to end the year. We heard today of the illness, then the passing of an old friend, a strong supporter of the monastery, who combined deep piety with a striking personality, and loyalty to this community, with a sense of detachment and simplicity.