Sunday 1st. Father Bede found a 90-minute choral music for Advent mix on You Tube to play for us at lunch, beginning with a swashbuckling number, ‘Wake, Awake, For Night is Flying’.

Monday 2nd. At noon meals, we have put aside for a bit martyrolgy readings, as the sort of postlude to the main book, and  turn to reading our Order’s constitutions, one paragraph at a time. These were written up in the 1980’s as a response to the Council’s request that each religious Order overhaul their constitutions.

Tuesday 3rd.  Snow! The trees across the lake look lovely snow-laden. Steve, unfortunately, had much plowing to do using the little tractor with no cab on it which serves until something better arrives. In Chapter, Dom Innocent commented on the Rule for the first time in a while. The text of the Rule of Saint Benedict never seems to lose its fresh, or striking, quality.

Wednesday 4th. As I looked out at the snow-covered landscape this morning, I realised that this year, the geese, if they have flown south, flew south without drawing much attention. The last time I saw them, they were “chillin’” on the lake, a few of them, as if no winter were drawing near.

Thursday 5th. Brother Leo got out to see the remains of our recent fire. Still surprised by this fire, he is someone who is gently surprised often, handling surprise better than most.

Friday 6th. A mechanic friend was by this week and, for interest’s sake, looked at our food trolley, whose wheels are running down. I asked him how old the trolley is. He looked at the wheels and replied: “1930’s”. 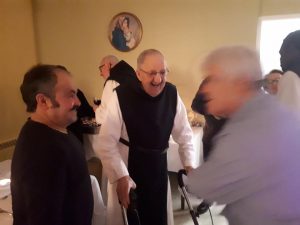 Saturday 7th. This evening we had our annual employee supper, preceded by Vespers. It is always striking to be together like this, outside our normal routine. . . and the food was great. Poutine rappée fever was at a Calvaire high, and even non-Poutine people had to admire Huguette’s creations. This year, we used the guesthouse refectory instead of the monks’, and the smaller space was cozy.

Sunday 8th. Dom Innocent got away long before sunrise, to Manitoba by plane for special celebrations for Dom Marcel Carbotte. The local Archbishop wants this year’s celebration of the Immaculate Conception to mark Dom Marcel’s 50 years as Abbot, and to honor the monks of a monastery soon to close, Prairies. Given who Marcel is to us, it is a great feeling to know someone from here will be there for this.

Monday 9th. This year’s Solemnity of the Immaculate Conception marked 66 years of personal consecration to Mary for Brother Leo, who was signed up for this devotion by other monks here at the time. He has his Christmas cards sent, and remembers the time long ago here when he was reprimanded for sending too many (60) Christmas cards in one year.

Tuesday 10th.  Dom Innocent was back for Compline, after a full few days taking part with other superiors in Dom Marcel’s Manitoban celebrations. The new tractor arrived by transport truck today. Its colors of yellow and green are familiar, but the build is a bit different from the one we had. Brother Stephan worked on it, preparing it for use with the snow blower and with the front end loader which he rebuilt from the burnt tractor.

Wednesday 11th. Someone pointed out how the commercial thinning of trees to the north of us, has rendered visible evergreen trees we did not see before. In refectory, the recording of the book at times falls back to a passage we’ve already heard, a segment of history that has already been covered. However, the book is so detailed that such returns are often time well spent.

Thursday 12th.  Father Roger got into Moncton today to see Brother Henry and Sister Jean-Marie. Brother Leo was delighted to see sunshine outside. As with the other Marian feast this week, Mass of Our Lady of Guadalupe this morning drew more people than usual.

Friday 13th. We were able to help out a little with the sisters’ move to their new monastic home, at the same time taking a brief tour of the finished building, which turned out excellently and,  though not inhabited, seems a space very personally theirs already. Their home up to now looms in the distance; they’ll continue to live in it a bit more than a day,

Saturday 14th. Maurice did some cooking today, I think that makes four different sets of hands in the pots this week.

Monday 23rd. Brother Glic put up the Christmas tree in the refectory, as well as wreaths, bows, strings of lights. Visitors went down to the grotto, and though the lake is frozen, water was running nicely off the spillway.

Tuesday 24th. As of a few days, one feels the weight of something approaching, in this instance, something beautiful: Christmas. We had a singing practice after Lauds, as well as a chance to run through the déroulement of celebrations now on our doorstep. After Vespers, we had a festive meat pie meal, with white squirrel accents, deserts and an ornament; no squirrel meat however. When we went upstairs for 7 PM Mass, the Church had the once a year feel to it, of something immense and quiet happening, and everyone implicated. 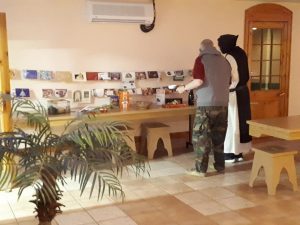 Examining the cards and goodies – Bede and Innocent

Wednesday 25th. Cards and treats have multiplied, and despite internet problems, monks were able to take in the Queen’s annual Christmas message, and celebrations at Saint Peter’s in Rome.

Thursday 26th. Someone from town asked me today, how is Brother Leo? Is he still alive? I said, yes he is, and that went down well. The breaker for heaters on the 2nd went, leaving some of us a bit perplexed until Steve hit the switch. Guests including my family share on many subjects in the guesthouse, this time of year; a turning point, also a bit of a still point.

Friday 27th. Cats are more visible with a bit of snow, and they like to hunt, snow or no. There are fewer cats around our door this year, and no one is certain where they sleep. A blue jay today soared over to a drooping sunflower to take a few jabs but no sooner had he arrived than he soared off again.

Saturday 28th. Brother Stephan cleaned the floor in the annex corridor area, which includes a laundry room, an exercise room; a now-largely unused television room and other rooms. 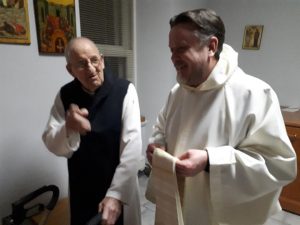 Sunday 29th. Father Bede got over to say Mass in the Sisters new home, it was also his first look inside a place which, naturally, people are talking about. He was pleased by the Chapel, and the building in general.

Monday 30th. It is inventory time for the store and industries, to give our accountant an idea of things the very last moment of the year. Votive candles seem to be gaining in popularity at the store, where winter sales are slower.

Tuesday 31st. Finishing the year on the right foot, Dom Innocent got in to Moncton to see Brother Henry. Brother Stephan was practicing organ in the Chapel this afternoon. Brother Leo was reflecting on his work; 31 years at the front desk, 7 years with the pigs, 26 years with the cows. Working with the pigs was the job he least liked. The front desk he remembers for giving him, often, a chance to read. Past dairy barn work causes the most dreams, today, for him, from among his past responsibilities.