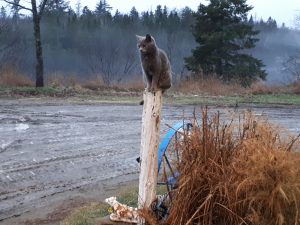 Getting a birds-eye view

Friday 1st. This afternoon, mild and very humid out, it smelled like spring. The humidity was hurting our youngest full-time farmer’s arthritis.

Our refectory book is getting into the nitty gritty of proceedings just before the fourth of July 1776 in the USA. It’s been said, and not as a criticism, that Americans differ from countries like Canada in that they mythologise their own history. This book makes a person wonder if their story simply lends itself to that, more than our own has.

Saturday 2nd. The prettiest thing outside this morning was the soft ditch running along the front drive. Because, a shallow puddle of water had frozen, and it was not transparent but almost, like a window. It was so humid out, and the air so still that you might not have been able to smell where you were:  the woods, or the Atlantic seacoast?

Sunday 3rd.  At Mass, some faces we don’t know were present, older Acadians, full of life and joy, and we were like a familiar home to them. 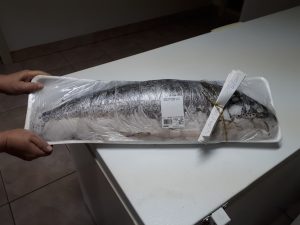 Monday 4th. A doctor who takes a retreat here each year before Christmas, is back. It is a quiet time in the guest-house, generally.

Brother Léo has reduced his Christmas card list, but still sends out a jolly elf-load.

Tuesday 5th. The bells outside have been malfunctioning, then surprising us by coming back on. Brother Léo had his check-up today and told the staff at the clinic the story of how his father would improvise a Santa disguise, and try to dazzle the kids. Guess the effect was a mixed success, because Léo’s Mom’s reaction would be: “Pau-vre Fred.”

Wednesday 6th. A young writer has returned and is making progress on his first book during his retreat.

Last night it was the turn of the downstairs floor of the guest-house to be resurfaced.

In Chapter this morning, Dom Bede let us know his homily for the 8th’s solemnity would be a long one.

Thursday 7th. Just before dawn was breaking, there was enough light on the lake to see how the ice’s surface was a beautiful design, a wind captured, not fully able to reflect the trees’ shadows. Out of sight, employees’ cars and trucks broke the morning silence as one by one they pulled in, entered the basement, punched in, drove ahead. You wonder, what will they be doing today. How are they doing.

Friday 8th. A fellow was by with a list of Mass intentions. “They’re all dead” he said, except for his friend, who is in the hospital: parents, wife, siblings, friends gone. Yet he was serene as a child who has yet to lose anyone.

By evening, both bells outside were working again, big and small duetting for today’s Solemnity.

Saturday 9th. Steve is prepping the snow blower, an impressive attachment which can be put in front of the biggest tractor.

Sunday 10th. The Lauds and Vespers antiphons (the short phrase we sing before each psalm) are nice, the composer has talent. They have lilt, or ‘ping’; but are understated. So he is just the man to compose Advent antiphons in particular. He was a Cistercian monk when he wrote them then he moved on, searching for a better or purer monastic life.

Monday 11th. A guest is here from Newfoundland. He seems to have been able to pick up what we’re singing, fairly exactly, immediately, and sings along wonderfully.

Some angels got into our refectory and cleaned the stainless steel, who knew it could be that clean again?

A star is laying flat on a refectory table, I guess it is the first sign of decorations yet to appear.

Tuesday 12th. Father Clovis brought Brother Léo some of our apples to eat while at his post at the front door. Father Innocent got into Moncton today for some tests, and to look for a warmer winter coat. On the way home we passed Saint Timothy’s in Adamsville, the first Church in our diocese to face closures which have been a while coming. Saint Timothy’s is in such a country spot that it had often been surprising and nice to see a Catholic Church there, quite a ways in from the highway, on a nice parcel of land.

Wednesday 13th. In chapter, Dom Bede announced that on Friday a vote would be taken, the community choosing one member of the Abbot’s three-person Council, which is being refreshed. The Abbot chooses the other two.

Thursday 14th. Brother Glic has been trying to remove marks left on the altar cloth by our incensing the altar. I guess tiny embers popped out of the censer.

Father Clovis wanted to take the Kia, in order to drive to the Sisters’ this morning, but the garage door was frozen shut so he used the truck instead.

Friday 15th. The old voting box was taken down from the shelf. On its side is pasted the Abbey’s Marian heraldic arms; our historian Robert Pichette has written that the date of composition of the arms, and the identity of their creator are both unknown. Voting by secret ballot this morning was inconclusive so, after hearing the results, and mulling it over for a day, we’ll reconvene tomorrow and hope one candidate garners the required three votes.

We received a very nice coil-bound booklet in French celebrating the bicentennial of Vaise, former Trappistine house in Lyon which boasts four daughter houses, three grand daughters, seven great granddaughters and six great-great granddaughters. Our Sisters across the track are called “Vaise II (1837, then new beginning 1904 in Canada under the name Assomption.)”

Saturday 16th. The lake this week, or the Miramichi River for that matter—you can’t always tell by looking, is it frozen or open. Partly it’s the light, this time of year.

Sunday 17th. Yesterday’s election reprise did not get any further than previous so, there we were again this morning. Bede (not without humor) always demonstrates that the box is indeed empty. Then the cover goes on and folded ballots go in. After opening and counting them, Bede tells us what the results are. Thankfully this morning we finished with the elected member of council, Father Roger.

Monday 18th. The Times & Transcript stories about the monastery and Brother Léo appeared in today’s paper, also appearing in the Saint John paper and the Fredericton paper. Irving owns all these: every English-language paper in the province; and prints and distributes the one French daily.

The monastery was the front-page story, the text running a full page later on. Over all, the result and reaction seemed to be better than when in years past newspaper stories were written specifically to give us a boost image-wise, by someone familiar with us. Reporter Michelle Bartleman learned of our existence by chance, after a first story idea did not pan out.

Tuesday 19th. Each of the monks received a box of chocolates from our friend Janine. 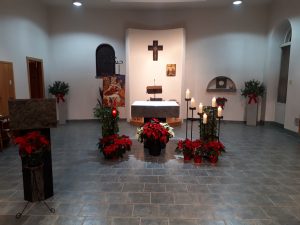 Wednesday 20th. The smell of freshly resurfaced tiles in the guesthouse brought back memories of elementary school.

Thursday 21st. Father Clovis visited a friend who is at home, in the last stages of cancer. They live along the same highway as us—it’s one long street.

On this first day of winter, Brother Glic celebrated his birthday.

Friday 22nd. A guest from the Island is here, who’s related to one of the late stars of Don Messer’s Jubilee, a down-east music show that ran on Canadian TV from the fifties to the early seventies.

Saturday 23rd. Simone has been making a ci-paille for us: multi-layered, multi-meat pie of Québec origin, this will be our first go at that. She got the recipe years ago from a salesman in Québec, then customised it to taste. Takes roughly four hours to cook, requiring occasional basting.

This morning after Lauds, we sat down again instead of leaving Chapel, as Brother Stephan went to the ambo to led a run-though of the singing for our two Christmas Masses, which have some of the loveliest Gregorian melodies of the year.

Because of the weather forecast, it was decided today that Brother Henry’s Christmas visit would be postponed until the Feast of the Holy Family 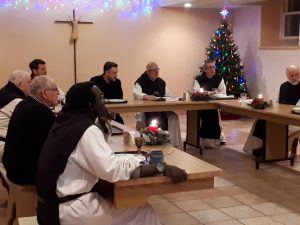 Sunday 24th. Having a last Advent Sunday the same day as the first Christmas prayers are said was a call and a gift in one. A first festive meal was immediately followed by Mass at seven PM, which had present, as always this night, faces unknown to us. The Chapel felt more than usually like home, and new.

Monday 25th. It was an icy Christmas morning, but beautiful out. Workers, arriving to punch in to work some of Christmas Day, deftly avoided falling on ice as they stepped out of their vehicles. 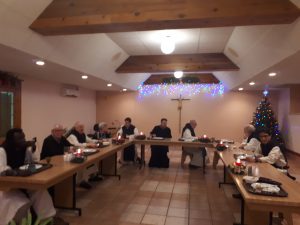 Tuesday 26th. Our friend John remarked on the smell of good food from the kitchen, early in the day. With cans of Quality Street chocolates appearing here and there, Dom Bede mentioned that growing up in England, Quality Street was the one gift he’d receive for every occasion or milestone; they are no longer a Rowntree revelation for him. Today, Bede was preparing a booklet to allow the employees to follow the Vespers which will precede the employee supper Friday.

Wednesday 27th. The Christmas cards received thus far have been put out in a nice basket, as usual. Cards from other monasteries express who they are (the community) and who Christ is for them, often with a minimalist illustration or creche, or other photo. The card from our sisters across the tracks has a lovely hand-written message inside, and on the cover are seven teddy bears surrounded by a wreath. Is there a hidden message in this card?

Thursday 28th. Air from the arctic having travelled down and lingered, it was necessary at times this week to thaw out parts of the milking parlour before work could begin.

Friday 29th.  Guest stars Melva and her sister Marila arrived bright and early to begin their day’s cooking/catering. By evening, the lights were on and everything was ready. The pleasure at being together was strong.

Saturday 30th. This morning Brother Glic returned to their place a few dozen chairs added to the refectory for our employees and their spouses. A lot of attention continues to be paid to our recent newspaper foray, with feedback from often surprising sources, or from friends content in varying ways. I guess, just as ‘the monastery’ is part what it is, part what people need it to be, so too a story about the monastery is a story about much more than that.

Sunday 31st. Brother Henry was by for the day. Along with Mass, and lunch, this affords him the chance to get together with his Abbot. As Henry was getting ready to head back over cold roads after lunch, a guest stepped forward, said hello, and told him she was his neighbour in Dieppe.

Michael has been skidooing to work, and today drove in on a different sort of skidoo: a rare, vintage one. You’d have a hard time believing it was a 1980 original, but it was. One ski only in front, of course. After work, he was making his way across the lake with it. 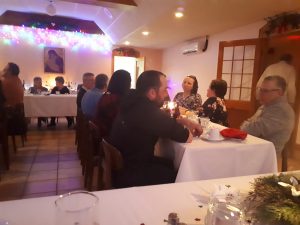 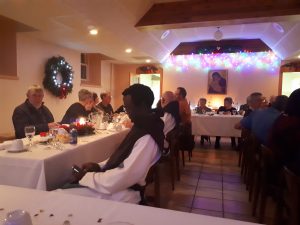 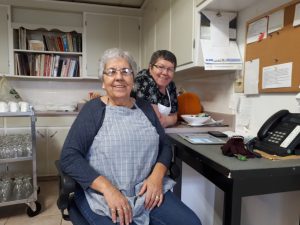