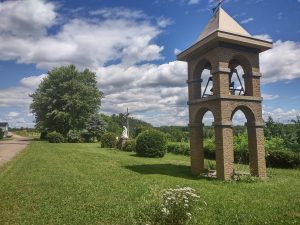 Monday 1st. Dom Innocent got an early start mowing the lawns today. Inside the monastery, the rocking recliner Brother Leo frequently uses in the scriptorium got some needed new covering for the arm rest, which he has worn away. Leo is impressed with the late American author Michael Novak, whom he’s now reading.

Tuesday 2nd. From what grows just outside, Father Roger has created a nice flower arrangement to place before the altar. In Chapter, Dom Innocent continued to comment chapter 2 of the Rule, on the sort of person an Abbot should be; a remarkably rich text. Innocent also updated us on his schedule leading up to part two of the Chapter in Assisi, in September.

Wednesday 3rd. Brother Leo made a very rare exit from the monastery, to the village, and enjoyed having a look around. He had forgotten how nice some things were.

Thursday 4th. The farm pick-up is now being parked in the shade, on the lawn, as the heat and humidity continue. These conditions seem to favor insect life, as quite a tiny variety steps forth, both inside and out.

Friday 5th. The hammock out front is getting some use now.

Saturday 6th. A friend replaced one of the fire exit signs in the basement corridor, with a more modern version. Such lights originally went in to keep us up to code for the province. Monasteries in Quebec, around the same time, had codes of their own to keep up with, some demands of which seemed extravagant. 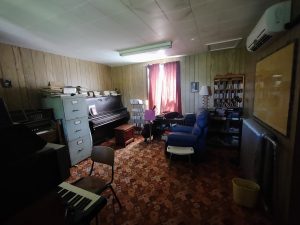 Sunday 7th. At Vigils and Lauds we sing hymns by the team of de la Tour du Pin and Gelineau; one element that would be nice for our bilingual set-up would be comparable English-language hymns.

Monday 8th. The Diocese’s novena for the Assumption is underway in the village, and for us this means old friends showing up, now and then.

Tuesday 9th. In chapter Dom Innocent gave us some updates regarding our fast-changing Order. This September’s General Chapter should be an important moment, and help give form to our Order’s presence in the Church this century.

Wednesday 10th. Temperatures having dropped back to normal, the week brought quite a rainfall, and we brought out the buckets to catch water from leaks in the roof on the east side. Dom Innocent took advantage of moderate conditions today to make a planned journey to Prince Edward Island.

Thursday 11th. Early in the day, the walk-in freezer’s temperature alarm was beeping. In due order, a cheerful technician got here from the Miramichi, and things cooled down. 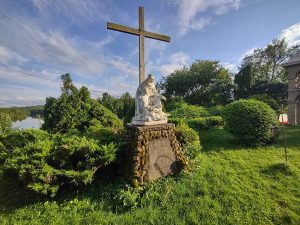 Friday 12th. A cricket found his way in, and accompanies our breakfast with his song. He has quite the voice.

Saturday 13th. Some of Brother Henry’s family made it up from the US, for the first time since 2019; Henry’s death occurred early in 2021.

Sunday 14th. Plenty of rain this morning, plenty of friends for Mass, and plenty of joy on the lake as a mother eagle watched over her child’s solo flights to the other side.

Monday 15th. Another happy solemnity of the Assumption, the day was fairly quiet here: quite a contrast with the 100th anniversary of the monastery celebrations held this day twenty years ago. Mass at the grotto that day drew a remarkable, and diverse crowd of people.

Tuesday 16th. With two solemnities falling between Sundays, making for a fuller week, this week we pause from having chapter meeting.

An original manuscript by our founder Dom Antoine Piana, discovered in the homestead in France, is being transcribed; we received the first few pages by e-mail today. Describing a return to Calvaire from France in 1920, Antoine focuses on the joys of a train ride from Montreal to his beloved Rogersville.

Wednesday 17th. Writing with gentle insight and care, the Abbot General published his first circular letter, just ahead of the feast of St. Bernard of Clairvaux. Our Cistercian charism is the focus. Dom Bernardus says “the rediscovery of our charism is first of all a mystical conversion which is also a social conversion”, also saying that “…if we have the courage to dream today…we will discover the Cistercian charism given to each one of us.”

Thursday 18th. During the Assumption Octave, a candle burns continually before a special icon in our Chapel.

Friday 19th. After quite a bit of rain, the sound of rushing water over our grotto spillway can now be heard from a distance. Today, Blessed Guerric’s feast day is also Dom Innocent’s birthday.

Saturday 20th. Not lacking courage, Brother Leo dreamt he was shown hell last night; he was able to check it all out, and says “it was interesting.”

Sunday 21st. In his homily today, Father Bede said that entering the narrow gate whom Christ himself is, is not possible without getting out of oneself.

Monday 22nd. Today marks the 60th anniversary of Father Bede’s entering the monastery, at Mount Saint Bernard Abbey in England. The day after entering, he was working the fields, stooking sheaves by hand. That year, 1962, was the last before the combine harvester came in.

Tuesday 23rd. In Chapter, Dom Innocent commented the Rule of Saint Benedict Chapter 3, on summoning the brothers for counsel. Before the week is out, Innocent will be on his way to part two of the 2022 general chapter in Assisi. Our refectory biography covering recent years of Pope emeritus Benedict, is considering his strong points anew, at the moment of history when he retires.

Wednesday 24th. Dom Clément of Mistassini is by.

Thursday 25th. Father Bede chose the Mass for the Preservation of Peace and Justice, today.

Friday 26th. The concrete slab behind the chicken barn has been enlarged. This surface serves especially when the barn is being refreshed for a new flock. In Chapter this morning, Dom Clément filled us in on life at Mistassini today.

Saturday 27th. The sun this time of year, hits the two stained glass windows in Chapel in an especially nice way during Lauds.

Sunday 28th. To celebrate Dom Clément’s presence here, we had a festive meal this evening, with a chance to talk.

Monday 29th. Our new refectory reading is James Herriot’s The Lord God Made Them All, from 1981. One of our employees has been mowing around the apple trees in our small orchard. The apples are coming along nicely.

Tuesday 30th. From the city of Rome, Dom Innocent is about to make his way to Assisi, where our Order’s General Chapter has so often been held. Dom Clément’s visit last week, and our informal discussion with him and Dom Innocent helped us form a picture of the roster for this year’s second such gathering.

Wednesday 31st. The water filter was changed on our little refectory sink, which also has hot water for tea or coffee. Our fish ladder down at the grotto got an inspection; the government takes the state of the province’s streams and rivers to heart.