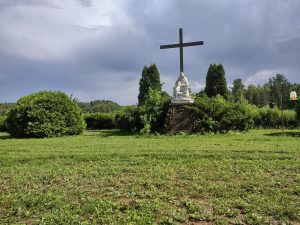 Sunday 1st. Some eagles were casually circling over the lake this morning. After several good hits of rain, the lawn is a lush green.

Monday 2nd. Our newest refectory audiobook, ‘Educated’, by Tara Westover, describes her emergence from an isolated, survivalist family  in the USA, to a fuller life, and education. We had a welcome visit from an Englishman abroad, originally from the south of England, now a full-time New Brunswicker.

Tuesday 3rd. Dom Innocent reviewed points made in a recent document from the Archdiocese of Toronto, entitled ‘Background for Catholics: Residential Schools.’ It is a well-prepared clarification and update on matters in the news, and on hearts.

Wednesday 4th. What had been the milking parlor, where eight cows at a time were milked, is in the midst of being made into a carpentry shop. The existing carpentry shop, a familiar feature here, is two stories and overlooks the grotto. It has seen better days, as buildings go, hence its upcoming replacement with the refit, which will provide space enough for essential machines.

Thursday 5th. Brother Leo was remembering his wonderful Dad, this morning; remembering also first visiting Moncton’s Magnetic Hill, where an optical illusion caused by the lay of the land, makes it seem a downhill car drive is actually uphill. He found it compelling.

Friday 6th. A rainy and very humid morning was greeted by soft birdsong, from here and there around the lake, off and on.

Saturday 7th. Some additional landscaping has been done around the new poultry barn. Completed right on time for a start-up that fell neatly just after New Year’s, the barn is tucked away next to a field.

Sunday 8th. The place is still quiet as regards numbers, but recently some faces long-absent from Mass reappeared, including some Acadian-Americans, now able once again to head north in the summer.

Monday, August 9th. There is not the usual Novena for the Assumption in Rogersville this year, however, there are some traces of it, and there will be the big Mass and procession on the day. The feeling this week  is similar to the big years, the feeling of being carried along to something beautiful.

Wednesday, August 11th. Brother Stephan is replacing the power steering pump on the farm pick-up truck, in the repair shop which was built to replace a shop lost to fire four years ago, on Saint Benedict’s Day.

Thursday, August 12th. One of Brother Leo’s cousins showed up for Vespers, the lead-up to the 15th having brought him to our neck of the woods. He has seen his share of summers, and has a happy face. 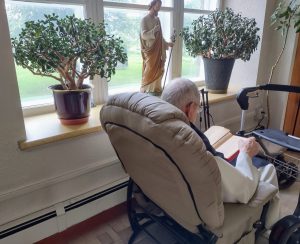 Brother Leo in the scrilptorium

Friday, August 13th. Now that it is more possible to enter Canada, there is some interest from the U.S. in booking retreats here. Though  numbers are small, the slight trend from before the pandemic, of more diversity in age and background among retreatants, continues. This summer, some retreatants showed up who are in formation for Priestly ministry.

Saturday, August 14th. The eagle family that favors our lake’s trees has been raising quite a cry, by moments; then all is still. Very early in the day, the cry of the loon rings out louder still.

Sunday, August 15th. A friend brought some plants to decorate the Chapel for today’s Solemnity, which brought the end (hopefully) of a hot weather spell. The fellows gave their all celebrating, and the day brought its  feeling of wholeness, and hope.

Monday 16th. The Order posted a gallery of images for the Assumption from monasteries around the world, and our icon is there.

Tuesday 17th. In Chapter, Dom Innocent gave us an update on  vocational interest here. He also mentioned that the liturgy commission had met, and come up with some slight simplifications of how we organise ourselves for the Office of Vigils, at 3:40 each day. This was done in order to make the best of the small numbers able to attend the Office.

Wednesday 18th. The community agenda has been updated, this is a little calendar of upcoming events. The first weeks of October we will have a Regular Visitation from Father Immediate Dom Clément. Clément was last here in February 2020, (well timed!) partly to prepare for the Order’s 2020 General Chapter, subsequently cancelled.

Thursday 19th. Dom Innocent celebrated his 55th birthday with a smile. Our new cook says he likes the kitchen here and the cooking. Also on the updated agenda: annual retreat in November.

One of the sinks in the basement lavatory is rusting through: out of order. There are a series of sinks. As well, there are rows of storage compartments, where monks can keep their toothpaste, razor, and so on. The room reflects the days when a monk would not necessarily have a sink or a room of their own.

Friday 20th. The solemnity of Saint Bernard arrived. As we sat down after the prelims at Vigils, Brother Leo as usual started off the first Psalm. For Saint Bernard this was Psalm One: ‘happy the man.’

Saturday 21st. The community received an inflatable canoe as a gift, and it did quite well on our quiet lake.

Sunday 22nd. Numbers were not great at Mass, but for us, a couple dozen people, as there were today, is a lot. 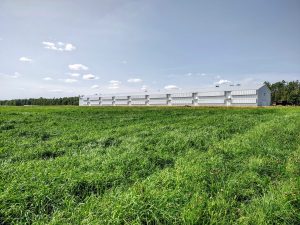 Monday 23rd. The eagle was sitting across from the monastery this morning, on the usual branch which gives it the best view over the lake.

Tuesday 24th. Our cook baked some more brown raisin bread for us. For those who like it salty, we had some nice cod for lunch.

In Chapter this morning, Dom Innocent read the July 2019 visitation card, to help us start thinking about the visitation this autumn. Visitation cards consider all dimensions of a community’s life, drawing on observations from the monks, pulling things together in a perspective offered by the visitor. It was striking to look back together, and consider changes over not so long a span of time. Summer of 2019, we were taking stock of life post-dairy farming for the first time.

Wednesday 25th. Brother Stephan is working at repairing the commercial dishwasher in the refectory, which is used for cleanup after lunch and supper.

Thursday 26th. Steve made some iced tea, three different flavors. We are now well into our third week of hot, humid weather, warm nights, with a change to nicer weather promised day by day.

Thursday 26th. New to us faces of the Church’s religious life appeared here this week, and it was beautiful to witness the ways faith and love can be.

Friday 27th. Dom Innocent was able to take part in a zoom meeting with other superiors this week. Today, many windows were opened, as cool air arrived. Brother Leo was curious about the open windows, as he had not found it all that hot recently.

Saturday 28th. As well as playing the communion hymn on organ this morning, Brother Stephan sang it: Always Be A Child, by Ray Boltz.

Sunday 29th. Brother Leo is enjoying with moderation a gift of fudge made by someone his own age, 94.

Monday 30th. The monks diligently gathered copies of the September Ordo. Brother Leo received a surprise gift book from the Oratory, Micheline Lachance’s biography of Saint Brother André of Montréal. A little slip of paper stated that the book had been blessed there for him.

Tuesday 31st. A few dandelions remain. Guests leave happy. In Chapter this morning, Dom Innocent briefly commented the ‘LETTER OF THE HOLY FATHER FRANCIS TO THE BISHOPS OF THE WHOLE WORLD, THAT ACCOMPANIES THE APOSTOLIC LETTER MOTU PROPRIO DATA “TRADITIONIS CUSTODES”.’ The fact of the need for such a letter seems to open quite a panorama on Church life, and human nature.