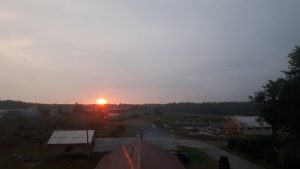 Saturday 1st. Two kittens were playing this evening on the little mound of earth dug up next to the monastery, an initial look underground for the wastewater project. To the east, the new chicken barn is now showing wood, and the outline of two floors. 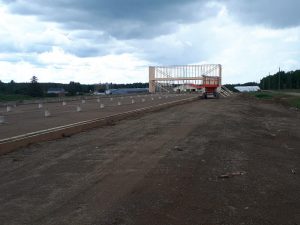 Sunday 2nd. A new dishwasher has been installed in the guest house, to simplify wash-up now that health restrictions are in place. In general, the guest house is quiet and announces quiet for the rest of the summer.

Monday 3rd. Brother Leo was saddened today to learn that Pope Benedict’s health had taken a turn for the worse.

Tuesday 4th. Our new refectory audiobook is: ‘Becoming’ by Michelle Obama. Strikingly, the former first lady reads this book to us herself. She is someone very at ease with herself/ her story, which begins humbly enough, in Chicago.

Wednesday 5th. Three different crews worked at three different sites here today, the sound of trucks or tractors going by punctuating the lovely August day. For the wastewater treatment project, it was a day of digging, and scraping back the surface of the earth. Although they generally enjoy watching big jobs, the cats that circulate freely outside are not impressed with excavation. By this evening, the area for the treatment system was cordoned off. It reaches from just past the front gate, to the stone monument to our founders, near the grotto stairs. 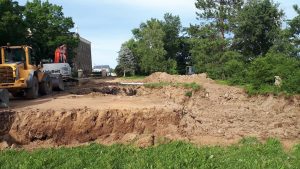 Thursday 6th. Heavy equipment has left white traces on the drive running between the lake and the monastery. This morning a high-hoe operator was in early and saluted me, as he quietly began his less than quiet day. I was talking with Brother Leo about the presence of bats outside, which led Leo to reminisce about his childhood joys. In the evening, bats would wing their way out of Memramcook’s big college, as Leo and his friends waited in ditches, in order to watch them fly, just over their heads.

Friday 7th. Michelle Obama’s sharp powers of observation, with a resultingly clear self-portrait of her early years, are reminiscent of Bruce Springsteen’s autobiography, which we’ve also heard read in refectory. Having finished daily refectory reading of our Constitutions as the supplement to the main book, we have now started in on the Order’s Statute on Temporal Administration, which begins by situating our temporal sphere within Cistercian  spirituality.

Saturday 8th. At Mass here, month by month the mood changes slightly among those who join us, because: of good news, bad news, chances, uncertainty; time. Summer has certainly also brought the village a certain peace, or wonder.

Sunday 9th. The raspberry u-pick has ended for the season. There were plenty of berries, and nice people by to work away gathering them. 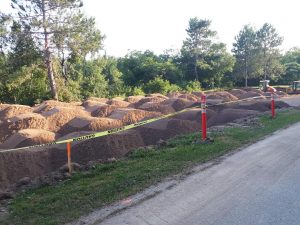 Monday 10th. A great deal of sand was trucked in for the wastewater treatment site. As well, there are stacks of blocks ready to go into service on the same system. Meanwhile, digging has been going on alongside the dairy barn demolition site, to reconnect the back-up well system, which once ran through the barn.

Tuesday 11th. A mother and son are here on retreat together. The first quarter of the new chicken barn floor was poured today, with more being poured through the week. Though seeing the floor appear is striking, it is hard to imagine what the building will look like inside once finished, as compared to our very old, present chicken barns.

Wednesday 12th. Today there was thunder, lightning, rain…but once again anything resembling a rain storm headed off, and soon it was sunny and hot again. The rainbow produced was the first Brother Leo had seen in a long, long while, he said.

Thursday 13th. Two deer were walking this afternoon along lake’s edge; reflected in the water, they seemed serene, one does not often see them there. The dryness of the summer is beginning to be visible in the trees.

Friday 14th. Michelle Obama’s autobiography is really in gear now; she keeps her pen busy and in check. The book confirms the impression that something like becoming First Lady one day would not have been on the map for her as a mature, young person. Dom Innocent visited Brother Henry today. A wedding party with photographer were by for a photo shoot here. These days the front drive with its majestic rows of trees seems to be a favoured spot for this.

Saturday 15th. Though we have not seen as quiet an August 15th as this in these parts, you can’t keep a good feast down, and today was lovely here, with nice liturgical celebrations, and lobster rolls for lunch. 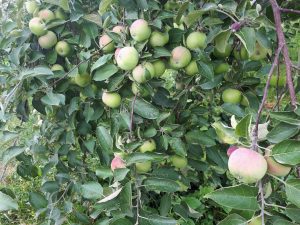 Monday 17th. Our friend John worked some more on the frame around the red chapel doors this morning. Downstairs, many tomatoes are in from the greenhouse. The sound of machinery is reassuring outside, as work on the water treatment site progresses well. With a little help from Tim Horton, the workers get off to an early and smooth start.

Tuesday 18th. A few guests are here, faces both familiar and new to us, as the place reacquires more of its usual ambience. Commenting the Rule’s teaching on brief voyages in Chapter this morning, Dom Innocent evoked monastic love of the place, as a point of reference for comportment while away from the monastery.

Wednesday 19th. With some ingenuity, space was found for storing more building material for the new barn. After Lauds this morning, we had our quarterly council meeting. A lot of the discussion at these meetings tends to focus on the near future, a time that has a different feel as we touch the other side of quite long planning phases.

Thursday 20th. Today was the feast of Saint Bernard, a solemnity for us. Brother Leo got to the Miramichi this afternoon for an appointment. He credits Saint Bernard with obtaining his vocation, because a turning point for Leo occurred on this date; as well, Leo entered the monastery during the 8th centenary of Bernard’s death, in 1953.

Friday 21st. The Province worked on the public road running parallel to the monastery entrance this week. The extended period of dry weather has made this road a trail of dust, which often becomes airborne. Today, the water treatment crew backfilled much of the treatment site, which now boasts impressive manholes. The pave where the front gate is had to be dug up, and was filled back in.

Saturday 22nd. Guests prepared for departure, some by car, some by car-sharing. To Brother Leo’s interest his beloved father, Fred Leblanc, figures in the book about his home village Leo is reading. Fred is interviewed regarding international travel: during World War I, then as a volunteer soldier fighting a losing battle against the Bolsheviks in Siberia. 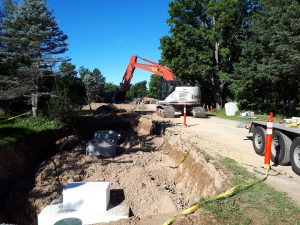 Sunday 23rd. For Communion, Brother Stephan played an instrumental version of one of the hymns we sing at Vespers, Au Commencement / In the Beginning.

Monday 24th. Brother Stephan worked today on the chair lift at the front entrance. The platform to carry someone glides up along a rail, but one spot along the rail is rough, and the ride can stop. Quieter days have come for the sewage treatment system, at least until the work recommences in a week or two. Understandably, folks have been a bit curious about what is going on, or up, out front.

Tuesday 25th. In Dieppe today, Brother Henry took in a thunderstorm which also caught people’s attention in the monastery. He has a bird feeder or two outside his window, and some customers were by. In Chapter this morning, Dom Innocent commented the Rule of Saint Benedict on the Oratory, which lead to discussion of our Oratory (or Chapel) here; it has been a while since we had reviewed how and what we are doing during the Liturgy, Offices especially. Simple, communal prayer is the goal. After some interesting comments, it was decided the liturgy committee would take up topics at a later meeting.

Wednesday 26th. The store was restocked with five-day candles, and honey. A visitor originally from the Middle East dropped by today. It was his first time seeing a Catholic monastery, and he was happy to. The latest generation of free-range cats here, are a bit more at ease with humans. Certainly, there is plenty going on outside to satisfy a kitten’s curiosity.

Thursday 27th. Bede made his way to a cheerful-enough Rogersville Health Center today, for a checkup. Work was done to further clear up the site of the former dairy barn.

Friday 28th. Our walk-in fridge has been out of commission for days, and the little fridges are giving their all, to keep it all cool. The liturgy committee met this morning, to take up topics raised. Brother Stephan worked on the car garage doors. Both now work at the touch of a button. This evening, an eagle was perched on a tree lakeside absolutely still.

Saturday 29th. Michelle Obama is both generous and judicious in telling us her story, in our lunchtime audiobook. Her voice changes slightly, with the emotions or thoughts her book brings her.

Sunday 30th. The wood of the second floor of the new chicken barn gradually appeared, through the week.

Monday 31st. An NB Power crew were working near the highway entrance to the monastery. They were replacing transformers along the line, to avoid having them wear out. Friendly people, they asked (as many do) how many monks are here, and how many chickens. As Dom Innocent noted, some leaves have begun turning color already. This evening, a dragonfly was perfectly caught by the light, as it moved through the warm, still air near the lake.