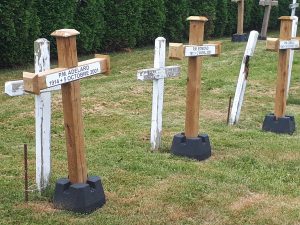 They shall all be changed

Wednesday 1st. An older couple from town asked where our raspberry canes are and went picking. Their own canes did not render much this year. Léo has been suggesting people pay what they think the berries are worth. We have also been selling tomatoes from the garden, at six dollars per five- pound bag.

Thursday 2nd. Groceries were delivered to the kitchen today, through the basement door in the center of the monastery. By chance, I saw the weather for Rogéville France rather than for here today: we can’t complain, as regards heat.

Friday 3rd. This morning, I was taking some air just around dawn when I saw a mother racoon with two young. For a second, it was beautiful, they were grazing. Then she saw me and faced me down. We did not fight.

Saturday 4th. Father Clovis is making cherry jam with our fresh cherries. Today, rain began and the heat subsided. My brother presided Mass today. He asked if there were any rules regarding the Priest’s introductions. I said no. Some North American monasteries have a three sentence limit.

Sunday 5th. With a good night’s rain, the roof of the stairway to the music room began to leak. There was a good crowd at Mass. The mood of the assembly changes at times, and this morning when Brother Glic read the passage from Exodus (would that we had died in Egypt, Moses…you’ve brought us here to die) there was what a Baptist friend calls ‘a holy hush’. That is perhaps one of the most striking passages in the Bible.

Monday 6th. Brother Glic lit the candle in front of the Transfiguration icon. Then we began celebrating today’s feast, at 3:40 AM.

Summer birds can be heard singing, though with heat and lack of rain, they sing less. The eagle’s song or cry is very different from the rest, and evokes the memory of sea birds’ cry. This morning her cry was repetitive, loud, and soft.

Tuesday 7th. Father Innocent continued giving Chapter on the Tools of Good Works in the Rule of Saint Benedict. Afterwards, he mentioned that we will begin marking our Priests’ anniversaries of Ordination; they will preside Mass that day. This morning, some folks from Shediac were by to see him about making custom funeral urns for them.

Bede has been able to order a copy of the official Roman Martyrology in Latin, this century’s edition from a store in Milan, for use in his Martyrology translation project.

Wednesday 8th. Brother Stephan and Brother Glic have been working on the chapel PA system; specifically the presiding Priest’s microphone. It seems that the wiring for it was not done right, originally.

After Compline, looking down through a window I saw our lumberjack friend out back, walking towards the setting sun, walking away from the big pile of logs behind the greenhouse. I wonder if he cut that wood.

Thursday 9th. The novena for the Assumption takes place evenings mainly, down the road. An old friend is taking advantage of earlier Mass times to pray a novena here.

The big windows in the scriptorium are about twice my height. This morning as I was reading beneath it, a nimble, mid-size spider was zestfully working the other side of the window. It was nice to see how unaffected he was by the heat and humidity.

Friday 10th. Lucien has cut back the hedge which juts out from the back of the monastery. Looked at from outside the cloister, it conceals part of the monks’ area, but if left to grow, it begins to make the area around the main drive less visible, less safe.

The community calendar has two new entries showing: 15 August, lunch at the Trappistines. 31 August – 13 September, Bede to Prairies; he will be assisting with the regular visitation at that monastery.

Saturday 11th. One of the inaugurators of the rvnb.ca, history of Rogersville website was by to consult our archives some more. He pointed out that three biographies of Msgr. Marcel-François Richard, implicated in our monastery’s coming to be, are now online on that site: the first, by Père Gildas of Oka; then the one by our own, late Father Doucet, published in 1974, as well as a facsimile of first Calvaire superior Dom Antoine Piana’s hand-written notes towards a biography of Msgr. Richard, running several hundred pages.

Sunday 12th. As we were proceeding out of Sunday Mass, a stirring song was played by Steve on the organ. Turns out it was Lupang Hinirang, the Philippines’ national anthem. 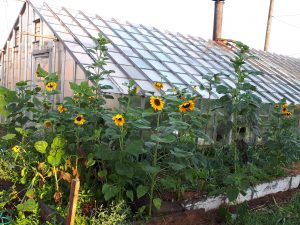 Monday 13th. Brother Glic has found a way to create dried tomatoes in our convection oven: dried, but still juicy. Father Innocent sent some fresh tomatoes to our sisters across the tracks. Bede and a geo-thermal technician toured the building today to look over some minor problems with the heating system.

Tuesday 14th. Assumption week brings unusual tides of visitors; high tide; then low tide when celebrations in the village or rediscovery of family and friends take the same people away. It is a nice feeling to see so many cars in the guesthouse parking lot before dawn. Older couples staying are humble and distinguished, easy-going; meeting them one realises how well so many people have responded to life.

Wednesday 15th. Dom Clément sent us a nice 15 August hello from Mistassini. He mentioned hot dogs and hamburgers being prepared there, as our own group was about to migrate across the railway tracks for same. As always, the best welcome is at our Sisters, as today, for prayer and lunch. They make their home feel like our own. Back here it clouded over for a thunderstorm in the afternoon. Dakota the dog made an impromptu appearance in our guesthouse. Always nice to see him, but where was his master? Eventually we learned that Dakota had been spooked by thunder, and bolted.

Thursday 16th. Father Innocent went to Moncton to see Brother Henry today. Brother Glic, who has more, and arguably better hair than most of us, got a haircut today. Only after a full day of much cooler temperatures did the swallows re-appear in our evening sky today, cruising at high speed through the air.

Friday 17th. Father Clovis says the apple trees are producing as well this summer as they did last summer. One of our senior-most farm hands has stayed on a bit after the dairy closure, and is close to retiring now. He helped bring our dreams to life.

Saturday 18th. Bede made his debut tour on ride-on mower this week.

Sunday 20th. Today was Father Innocent’s birthday. At lunch we listened to Riders in the Sky’s expert tribute to the songs of Roy Rogers, King of the Cowboys.

Monday 20th. Work in earnest continues on the geo-thermal lines, with ladders, scaffolding and so on dotting the corridors after sunset. This made the place feel like home because it looked like that for quite a while during installation. At the same time today, another team worked outside to shore up the base of the back-up generator’s fuel tank. A mother and daughter dropped by to say hello to Brother Léo. The daughter had not been here in 25 years.  We talked over a festive Saint Bernard’s Day lunch. Topics included politics, critters, and the book we are currently hearing in refectory, the Book of Joy by the Dalai Lama and Archbishop Desmond Tutu. It is both a guide to joy and a book of Buddhist apologetics, arguably. And a good one.

Tuesday 21st. New books arrived for the store; new Rosaries, too. Quotes are coming in for the rebooting of our walk-in freezer.

Wednesday 22nd. The power went out with a bang just as we were about to begin Vespers. The diesel generator outside came on, but no power. Steve went and pulled a switch in the electrical room, and the lights returned.

Thursday 23rd. In the hours before dawn, the grasshoppers’ song is quite strong and lovely. During the heat wave, it was frogs we heard, and that was pretty, too. Steve and Bede went to Moncton today and saw Henry. In Moncton, Bede got a chance to use his Italian, with a fellow named Rocco.

Friday 24th. Under a haze caused by forest fires out west, a bus cruised in with a tour group, on one of the ‘mystery tours’ which have become popular among seniors, mainly, who enjoy not knowing where the tour will take them when they start their day. Another couple from Saint John happened to show up to have a look around at the same time; they are in the area for the annual bluegrass festival. NB Power were by to advise us on safely enclosing the transformer box on the front lawn. The tour bus driver came up with the idea of strategically placed decorative boulders around the transformer, which is what Steve and Brian did.

Saturday 25th. The eagle soared and circled easily; casually over the lake, not far from the monastery. Later, he sat in his tree again facing south. The eagle is so on top of its affairs, or seems to be, that it simply, intensely is for fairly long periods of time.

Sunday 26th. Father Bede showed four visitors around this afternoon. Brother Stephan prepared for the sale tomorrow of silage remaining from the 2017 cut. A farmer will be by tomorrow and take away all that’s left in the plastic-covered bunkers. 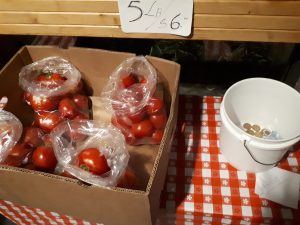 Monday 27th. Employee wedding on the weekend—a happy moment—and they saved us some cupcakes, which were served for desert this evening.

Tuesday 28th. Brunswick Fyr and Safety were by to check our fire extinguishers. They have a nice truck. The big trailer truck for picking up the silage had trouble and Steve had to give her a boost. He patiently loaded in the sold 2017 silage, one tractor bucket at a time. Smaller piles which had been covered with plastic—left over from the the bunkers—had succumbed to the racoon and crows’ interest, the plastic compromised, the bit of silage rotted.

Wednesday 29th. The silage has a smell to it, hard to describe; a little sweet and a little off. Some crickets have made it inside, hidden in different parts of the basement. Before dawn, you hear one, and realise how loud they are. They’re also alert and if they hear you approaching they fall silent. This afternoon, a brother of our late Father Adrien was by with his wife to say ‘hi’. The Bordage sense of humor was well in evidence, and Adrien’s memory remains fresh.

Thursday 30th. Brother Glic has created a dried apple snack that form a distance looks like chips. Father Roger met the new manager of the grocery co-operative store in town, someone who moved here from Belgium. A series of doors to the exterior were opened to ventilate the chapel this morning; also giving us a taste of garlic from the kitchen below. The high humidity outside has lasted over two months now.