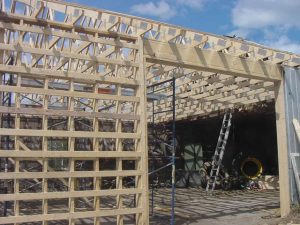 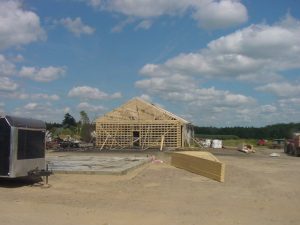 Tuesday 1st. For the moment we’re fewer than usual. Brother Stephan has left the organ to sing Lauds and Vespers with us for a bit. Having him solo on hymns is a bit of a refresher course on ways to interpret a given melody, as he wrote the music to a lot of the hymns.

Michael who works for us has been getting dirty clearing away the last of the wreckage from the fire, his arms and face blackened by soot. At the same time, other workers have been tackling the reconstruction of the section of the garage which the fire affected but did not destroy.

Wednesday 2nd. Father Innocent arrived back to us, joyfully. Our cook is preparing a special, secret meal to share with some monastic visitors who’ll be by Friday.

Thursday 3rd. Some of Brother Leo’s dreams are striking. For instance; he dreams of strangers, simply seeing them there before him, without being able to tell who they are, then the dream ends.

Friday 4th. Father Jacques from Rougemont dropped by with a friend of his from Grand Falls. It had been many years since we had seen Jacques here. We are all in a way family, in Canada’s monasteries. The meal’s secret was: water chestnuts wrapped in bacon.

Saturday 5th. The crew building the replacement buildings are from Tracadie New Brunswick, work well and quickly. Outside of the garage are some huge sacks of fertilizer, singed by fire, no longer usable; also a set of fresh joists that will form the roof of the shop which is next up for construction.

Sunday 6th. Taking advantage of the long dry spell, a friend of ours climbed down onto the spillway at the grotto this week to sweep it clean. Confounding rain skeptics, it really rained today; not for hours and hours, but enough for water to seep into the foundation under the big, red doors. Laurie our farm hand said it was enough to do some good.

Monday 7th. The old cannery, as it is called, looks nice. It’s on the south side of the front lawn. Joe Leclair has done a great job repainting it. It is a building with character, and who knows how old. A member of our monastic family, Father Immediate Dom Clément arrived in time for Vespers and supper today.

Tuesday 8th. The ground hog, out back, has not been himself lately. The other day he glared at me more intensely than usual, then tore off. I didn’t think he could run so fast. Turns out he’s even charged on Father Innocent, without injuring him.

The Visitation having been opened in Chapter this morning, members of the community began to meet individually with Dom Clément to say how they see things here, taking as much or as little time as they wish. This evening, Clément showed us photos from home as well as videos showing the Mistassini chocolate factory. New video for the 50th anniversary of the invention of fresh blueberries covered in dark chocolate, the great, refrigerated, Lac Saint Jean treat.

Wednesday 9th. Maurice Gallant drove up to the monks’ cemetery (just outside the back door, to the left) with a little trailer load of new, wooden crosses. The white-painted wooden Crosses which had served well can no longer stand straight. Winter here is hard on them. 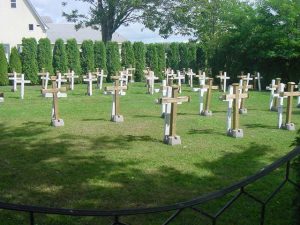 A new look for the dead.

Thursday 10th. Innocent found some blueberries growing in the backyard. They are bigger than the blueberries I remember picking in New Brunswick country fields as a boy. A better sight, still: Father Roger got back, as we were dining with Dom Clément and some of the Sisters to celebrate Dom Clément’s recent election as the eighth Abbot of Mistassini.

Friday 11th. A lone apple from the orchard has appeared next to the employees’ time clock. Today was the moment to close the Visitation. Clément read then signed his document, the Visitation Card, which is sent to the Abbot General in Rome. According to the Statute, the Visitor “…will summarize the community’s view of itself. He will add his own perception of the situation of the community…”. There is huge leeway for deciding what a person would or even could say in a few pages. In Clément we are blessed with a Father Immediate who is human, bright and spiritual.

Saturday 12th. Our Lady’s Saturday. A nice chance to prepare for the great Solemnity a few days away, which always gathers people, familiar to us, new to us, here.

Sunday 13th. The long, milk pick-up truck comes early these days, which is to our liking. It gives more time for washing and sanitizing the big milk tank in preparation for afternoon milking. 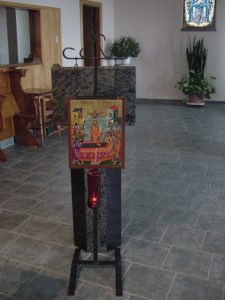 Monday 14th. Above the huge doors to the hay barn, the plastic owl happens to be turned towards the construction sight. This owl was placed there to frighten away birds which weren’t best for the farm environment. His presence becomes less striking with the years, and I’m not sure how frightening he has proved. 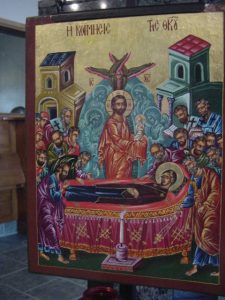 We have been seeing license plates we rarely see in the guest-house parking lot, like Ohio and Connecticut.

The new book for refectory, SPQR by Mary Beard, is excellent. But to fully bring across the baffling (even to her) complexities of dealings between ancient Etruscans and Romans, you’d almost have to bring in Monty Python.

Tuesday 15th. Acadian construction crews don’t work on the Solemnity of the Assumption of the Blessed Virgin Mary, so things were quiet out back today. Because of the intense ecclesial and family moments nearby, there were actually fewer here for the liturgy during most of the day. Before lunch we packed it in and headed over to the Trappistines for prayer and backyard barbecue. One of the nicest moments of the year.

Wednesday 16th. Father Roger and Brother Glic got away just after lunch. They are headed to Mistassini, to attend the Abbatial Blessing of Dom Clément on Friday. The GPS initially offered to take them slightly north, then north-west over a long, chancy and secluded road but they’re dipping south a bit then west then north. Trans-Canada Highway.

Thursday 17th. We have a full complement of spiders, and this summer a few new faces among them. A tiny, indoor spider that seems unusually aggressive. Plus spiders that like to live inside the dumpster, and have strange markings on their backs.

Friday 18th. The construction crew has had to work on another, nearby project, so work has not advanced much out back this week. The repair shop itself has only the pad in place.

Saturday 19th. We got rain, but not the downpour which other, nearby communities got. We’ve also received visitors from Antigonish, Nova Scotia. Great to hear that accent again.

Sunday 20th. Today marks 55 years since Dom Bede arrived on foot to the monastery of Mount Saint Bernard, to enter. This anniversary made the day happier.

As Saint Bernard’s memorial is a Solemnity for us, it displaced the 20th Sunday here. Our friend John helped out with the incense at Mass, in Glic’s absence. The Mass Preface blesses God for Bernard through his multiple roles, including ‘teacher in the school of charity’. The Order was promoting this idea of the monastery as school of charity when the Abbot General visited in 1996. In Chapter, an older monk confronted him: “What’s with this school of charity business? Where did you get that? It’s not part of the original vision of the Order. I came here to serve the good Lord, not to attend a school of charity!” The Abbot General did not flinch or take offence.

Monday 21st. Having crossed the Saint Lawrence River by ferry yesterday, Father Roger and Brother Glic returned to us this afternoon, none the worse for wear. Naturally, they were fully armed with chocolate treats for us from Mistassini. Oh, the marshmallow, wrapped in chocolate.

Tuesday 22nd. Dom Bede has been preparing more, new liturgical books and this week the book for the Apostles’ Feasts will debut. It is composed of all the material we are presently using for these Offices, but in one book.

Wednesday 23rd. In the basement corridor, Brother Leo and the cook called out musical morning greetings to one other. Nelson Eddy and Jeannette MacDonald they’re not.

In Chapter, Glic and Roger related their journey to Mistassini for the Abbatial Blessing of Dom Clément, which boasted a wonderful assembly of monastic folk. The Bishop who presided, Msgr. Rivest, remembered Montrealer Glic from days when Rivest served as auxiliary Bishop to Montréal’s Cardinal Turcotte. Travel-wise: as usual, there were roadworks in Quebec. They saw only one “critter” of note, a fawn standing quietly on a forest road.

Thursday 24th. This time of year—the light changing—the little windows in the hay barn offer an especially clear view through to the east. Quietly bubbling with life, the guest-house and Mass in August are a rich summer mix. 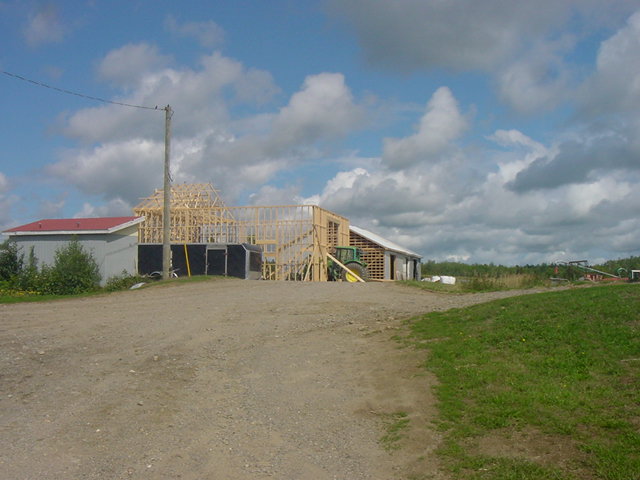 Friday 25th. The owner of the company which is building the new shop and garage gave us some bottles of mackerel, which we have yet to tuck into. He also stopped in to the barn to look over the herd. He loves animals. Today, the first 6 trusses went up on the shop roof. This evening, two bus-loads of visitors joined us in Chapel for Vespers, a capacity crowd for us. They are from Fredericton’s French-language Parish Sainte-Anne-des-Pays-Bas, and were brought by Father Shawn Daley; a Vespers with heart.

Saturday 26th. The community’s agenda, updated by Bede on an ongoing basis, is posted near our mail boxes. As we head towards the last third of 2017 the agenda gets simpler, consisting just of our community retreat in October, the regular council meetings, and Dom Bede’s soon-approaching absence for the tri-annual General Chapter in Assisi.

Sunday 27th. Brother Henry joined us this morning, till mid-day. He found the monastery so quiet. His room is exactly as he left it when he moved to the residence in Dieppe, and he spent time there between prayers, meeting with the Abbot and other monks, lunch. 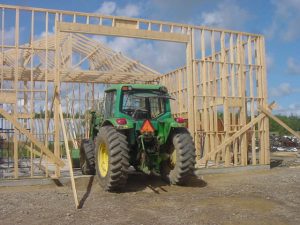