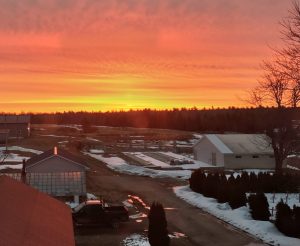 Friday 1st. A list has been posted for Mass duties for Holy Week; another list gives the schedule. Easter Vigil will once again be at the regular time for daily vigils, 3:40.

Saturday 2nd. The snow has melted enough for the little no parking signs opposite the front of the guesthouse to reappear.

Sunday 3rd. Beginning this fifth week of Lent, some hymns we now sing for the last time this year, as the repertoire changes, nea 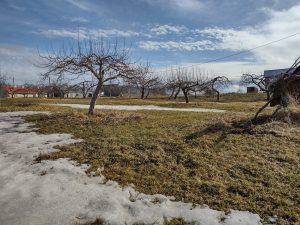 Monday 4th. Some traces of the Chapel’s recent paint job were removed today. A first-time retreatant arrived by train yesterday and seems to like the place.

Tuesday 5th. The community met again to look back on 2021, and the many aspects of life a financial statement reflects: liturgy, formation, care, travel, farming, housekeeping, heating. Our cook made some Chinese food, her style this evening, with a good soup, too.

Wednesday 6th. Just after dawn, a lone goose silently, and quickly, flew by overhead. Dom Innocent has been pruning the apple trees, a task which has to be accomplished before spring is too advanced.

Thursday 7th. Brother Stephan has made a tree swallow birdhouse, positioning it low enough to discourage entry by the many starlings we have. This morning, he was servicing the tractor’s snow-blower, before we forget snow until next winter.

Friday 8th. With the heaters running less at times in the Chapel we can faintly hear big trucks rolling down the highway, a reminder of the nearness of other souls, during Vigils. 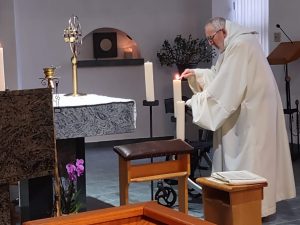 Saturday 9th. During one of the many naps he must take, to his surprise Brother Leo dreamt he was at a wonderful ceremony filled with local Church figures, to honor him. Directives were posted for the liturgy of Passion Sunday, a unique turning point in the year.

Sunday 10th. Our sacristan Father Bede had things in place for a lovely celebration this morning. 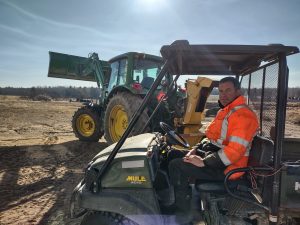 Monday 11th. Holy Week, we begin singing a hymn to the Cross, ‘Vexila Regis’ twice a day at the Offices, once in Latin, once in a French translation. The guest house is ready for a small influx of guests, for the Easter Triduum.

Tuesday 12th. The snow melt has rendered visible from a distance the lakeside trail, which guests can use: only the trail through the trees remains white.

Wednesday 13th. A computer technician was in today. Outside, there is quite a sound of water going over the grotto spillway, a sign of spring. Monks are taking their bicycles out of storage and checking them out.

Thursday 14th. After Tierce at 8, we had a look through the celebration for this afternoon, at 5:00. Present for that were some guests, and locals, but not many. It is a time of year with different, once a year details to keep track of, but also with long, quiet periods, preceding celebrations at the center of so many lives.

Friday 15th. The Chapel was rearranged slightly for Good Friday celebrations. Our crucifix, from the scriptorium, with hand-carved Corpus, was very much in the center of things.

Saturday 16th. Dom Innocent is trying out some new, motion sensitive lightbulbs for the stairways. Years having brought us to an unusual combination, Brother Stephan had to weld an extra number 2 to go with the other metal numbers, placed on the Paschal candle for tomorrow.

Sunday 17th. The Paschal Vigil got underway at 3:40 AM, with the different monks taking turns, reading, and singing. Brother Leo got through the nearly two hours with ease, and showed an impressive amount of meet and greet-ability, afterwards. The second, morning Mass drew a fair number, and by Mass’ end, it was snowing out. 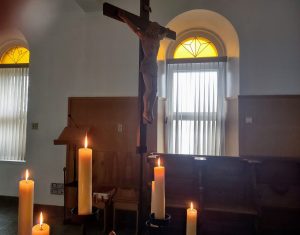 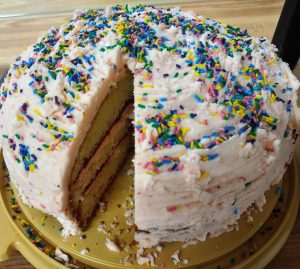 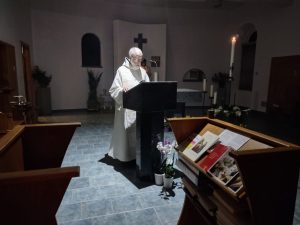 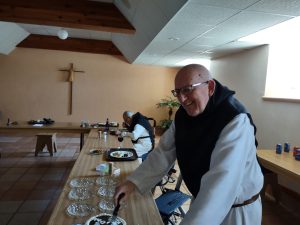 Monday 18th. Easter Monday, Bede presided a Mass to thank God for his 50 years of Priesthood. This called for another festive lunch, to follow Sunday’s. Bede received greetings, which Dom Innocent read to us at table. At the time Bede was ordained, there were so many monk-Priests at his Mount Saint Bernard Abbey, that few were the homilies expected of one, in the course of a year. Bede studied liturgy in Paris, the years after his Ordination, and says that Paris itself, with its diverse Church life, gave the chance to learn much liturgically.

Tuesday 19th. At Chapter this morning, we heard observations on the state of our Order from the recent General Chapter in Assisi. Dom Innocent is hoping to fire up his kiln this season, as our store needs more pottery to sell. The grotto, with its little stairway down, seems to bring a variety of people a lot of joy.

Wednesday 20th. We learned of the passing of a former, long-time retreatant, whose beautiful witness was striking.

Thursday 21st. Monks are receiving Easter cards from near and far. Pruning has been going on outside, around the monastery. I have yet to check the rose bush, planted in honor of Father Bede a while back, to see how it managed to get through winter.

Friday 22nd. It is nice to see cars from around the maritimes in the guests’ parking area once again.

Saturday 23rd. We received word today of a public meeting to share thoughts regarding the approaching fusion of Acadieville, Rogersville, and Collette, part of NB reducing 340 rural entities to 90, by January 1st. 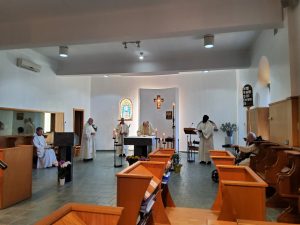 Sunday 24th. At lunch, we once again listened to music by the Choir of King’s College, Cambridge.

Monday 25th. One of our chefs has come up with a prototype Calvaire granola mix, for breakfast. Nice. Brother Leo was reflecting on hermits we’ve known, and mentioned that he loved days spent in the hermitage here, long ago; says he would have been happy on that path, had it been what God wanted for him.

Tuesday 26th. Across the lake, there is a soft red color from  buds on the trees. Our big oven range is getting a little work done. It is a restaurant style range, from long ago. This morning, Dom Innocent shared once again regarding a vision of our Order’s circumstances today, drawn up recently in Assisi.

Wednesday 27th. White orchids from Easter look nice under the ambo, which is black and grey. Brother Stephan is taking a few days’  course in the Miramichi, to help him carry out groundskeeping. Dom Innocent posted a last call for material to be used in drawing up our house report, to be sent to Rome.

Thursday 28th. Dom Innocent went to pick up a shipment of clay for his pottery today. We began a new refectory audiobook, volume two of Benedict XVI: A Life. On the second floor, a new section of the library now contains print versions of audiobook selections from past lunchtimes. There are also a few from before audiobooks, when we took turns reading, instead, including a travel book we found striking back then, Travels With Herodotus, by Ryszard Kapuściński.

Friday 29th. Under soggy, snowy skies, Dom Innocent got away to give a day and a half’s recollection in northern NB.

Saturday 30th. Though monks are attentive to lunch reading in general, when we start hearing about Joseph Ratzinger’s itinerary through, and experience of, the 1960’s, attention is captured in a unique way.