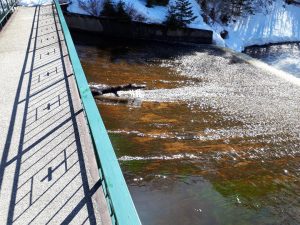 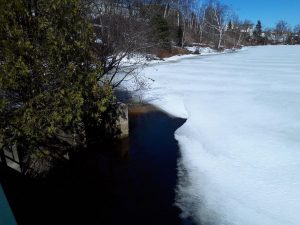 Wednesday 1st. Among monks’ anniversaries this month will be 35 years Ordination for Father Roger, Easter Week. Liturgical supplies were delivered today, which means no journey to Moncton, no journey out of a zone as yet untouched by Covid19, will be necessary for us. Even as world news takes us aback, the season steps near its completion, offering strength; the Psalms in particular offer an ideal chance for prayer. Brother Leo, having lived so long without seeing the likes of the present crisis, is getting his bearings better now.

Thursday 2nd. The grocery person arrived with a delivery, just as we were gathered for prayer before lunch, the door opening onto two lines of monks. A bit surprised, he is a great fellow, and this week we could see what a lot of food he brings us.

Friday 3rd. Brother Glic left our corridors today. He had been here since 2014. We are thankful for the person he is, and wish him every blessing in new endeavours.

Saturday 4th. We had a first practice and planning meeting for Holy Week. For Palm Sunday, we retain Ingrediente Domino as introit, but will have no blessing of palms, or procession. As monks rested this afternoon, a cat was tucked out of sight against the red Chapel doors, in the sun.

Sunday 5th. The rose bush planted by a devout Catholic lady near the front entrance, in honor of our Bede, seems to have come through winter quite well. The liturgical palms we did not carry in procession are instead in a vase decorating the Chapel, just in front of the Tabernacle.

Monday 6th.  Our regular cooks keep chugging along, looking forward like all our neighbours do to the time when ordinary contact can return. The Mass, even celebrated only among the monks, connects us to a much bigger scene. As the days grow lighter, Brother Steve has been getting more organ practice in, around midday.

Tuesday 7th. As Easter approaches, a feeling of warmth and mystery gently fades in. It is, among other things, a souvenir of Easters past, fellow Christians here with us at a time when the essential emerges. In Chapter this morning, discussion included health measures we have taken; and plants inside and outside. Later on in the week, Dom Innocent received a shipment for his greenhouse, and lit up the wood stove there.

Wednesday 8th. We received as a gift from the author, a copy of Dom Yvon Joseph Moreau’s Stations of the Cross book. Dom Yvon was Abbot of Oka, then Bishop of Sainte Anne de la Pocatière. Brother Leo has taken up the book to give it a try, as he prays the Stations daily.

Thursday 9th. After Lauds we ran through the celebrations for this evening and for tomorrow afternoon. The fellows are in great spirits, considering. Today’s liturgy has some Gregorian we rarely sing. 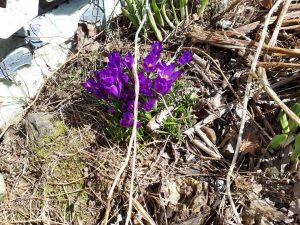 The first flower of spring

Friday 10th. While other parts of the province prepared for rain, we received lots of snow and, this morning, high winds. The briefer Good Friday Celebration of the Lord’s Passion closely resembled our usual ceremony. The persons and events commemorated today reach us differently in 2020, perhaps in a more direct way.

Saturday 11th. Yesterday afternoon, birds were distraught at the snow, a little frantic. This morning in the sun, a robin sang here for the first time this spring, just as beautifully as each year, just a little differently, too, her voice restrained, and higher. Brother Stephan had tractor trouble, plowing snow, but managed to finish using a smaller one.

Sunday 12th. Putting their heads together yesterday, the monks put the finishing touches on what would be our Easter Vigil liturgy today, and this was just right. . . although a large part of the night was affected by the wildest series of power outages and on-againages I have witnessed: a sound and light spectacular.

Monday 13th. As it warms up slightly, air from the draft in the Chapel becomes slightly more pleasant. The time of year brings anticipation of stir and, because of the Paschal Mystery, new ways of looking at life.

Tuesday 14th. Brother Leo was taking walks for exercise in the corridor today. He has begun reading Meeting Christ in His Mysteries: A Benedictine Vision of the Spiritual Life, by Gregory Collins. He says that it is peppered with citations, and a pleasant read. Last week, he was musing on the mystery of suffering in the everyday. Mothers, he says, suffer more than anyone in the world.

Wednesday 15th. Brother Stephan showed Dom Innocent how to find a natural peat moss bog, not far from eyeshot of the monastery. This is a gardener’s delight; our late Father Edmond Richard used to draw on the bog for the greenhouse.

Thursday 16th. Dom Innocent got into Moncton and Dieppe today. Brother Henry, who is in a locked-down care home, was ready to greet him through his window, and was in good spirits. In the village today the mood seemed gloomy and happy all at once.

Friday 17th. Easter treats this year include gifts from the chocolate-making monks of Mistassini, Quebec. Their ‘poules’ come in a box nicely decorated. There is a computer-generated image of an overweight Trappist monk, with a big smile, who gives the impression that there is not a lot that would shake him up, in any way.

Saturday 18th. Today was Bede’s 48th anniversary of Priestly Ordination and he spoke about this briefly and well, introducing today’s Mass. Once ordained, to Paris he went, to study the liturgy. He spoke by phone with some Abbot emeritus friends this week. I heard from a monk friend in Europe who recently caught Covid19 while in Italy, flew back to his own country, laid low in his monastery in isolation for two weeks, and is now fine. As striking as that was to read about, his commitment to monastic life, as reflected in his words, was more striking still. 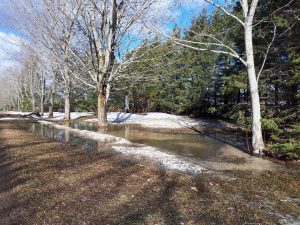 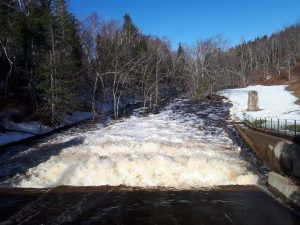 River below Dam at Snowmelt

Sunday 19th. As layers of ice melt from the lake, tracks of animals that walked there earlier in the winter re-appear. Our empty guest house seems cozy, ready to welcome new guests in the future; ready also to wait.

Monday 20th. A goose stood patiently on the lake’s ice, the water soon to open up. We received some nice Easter cards from here and there. Father Bede replenished the tabernacle lamp in the chapel. The lamp now consists of a wick floating on oil, in a translucent container.

Tuesday 21st. News arrived, the last few days of a murderous rampage, begun not far from our Province’s border. Our prayer continues, against the backdrop of the world’s song this year.

Wednesday 22nd. To warm us, we had clam chowder for supper this evening. Brother Leo weighed himself this week. This led to memories of boxing, and its weight classes. When he worked as a lumber jack in camps as a young person, winter-long, a way of life he enjoyed, he says the men would box in their spare time, they had gloves. This led to one of the lumberjacks saying to Leo ”Hey. You there. You’re getting on my nerves; you’ve always got your left knuckle in my face.”

Thursday 23rd. A delivery person found Brother Leo in our chapel, so that Leo could acknowledge receipt of a package. One of the monks had to drive to the coast on business; a rare excursion, these days. A new bird feeder has appeared, hopefully this can attract some new friends.

Friday 24th. Today marks 32 years of solemn profession for Brother Stephan. He was working on the system which controls the back-up generator this morning. Partially thawed, the lake partially froze again over, and now there are two tones of ice, with a lovely white crest at water’s edge. 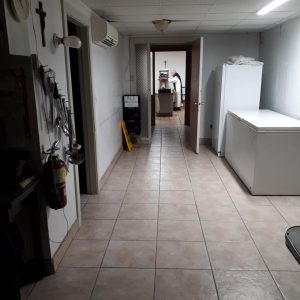 Br. Leo in the approaches to the refectory 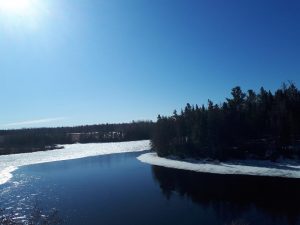 Saturday 25th. With Chapel benches unused celebration after celebration as we stay up front, I realise in a new way how nice the chapel looks. Certainly finding six feet and more of space, someone parked and prayed their Rosary out front here. A young person jogged through, with his headphones on. A neighbour is discretely landscaping spots of winter damage on people’s lawns. People are fragile, the news says; but people possess something so fine, too.

Monday 27th. The wind was blowing hard today; our yellow and white Vatican flag was waving and snapping in front of the quiet guesthouse. The waterfowl were relaxed on the lake, while ground hogs and other small animals, seemed a bit more frantic.

Tuesday 28th. In chapter today, after Dom Innocent commented the Rule, we exchanged thoughts on the disposition of the Chapel, and reviewed functions. Given our present line-up, Priests are now also taking their turns doing the first reading at Mass. Otherwise, our organist Brother Steve would be the only such reader. Because of the way the government lockdown is developing, it sounds as if lay participation at Masses will not be restored for a while yet.

Wednesday 29th. Our book for the refectory, River of Doubt, has been regaling us with the nitty-gritty of Amazon wildlife.‘Nature, red in tooth and claw’ as Tennyson once put it.

Thursday 30th. For many years, the community has considered the eventuality of needing to build a new poultry barn, in order to phase out the present barns. Now, two years after our exit from dairy, the project has quietly commenced. At what will be the construction site, in a field not far form the  monastery, the grass sod was tilled to facilitate top-soil removal. We are hoping to sell the topsoil. Gravel for the area around the new barn will be taken from our own gravel pit.