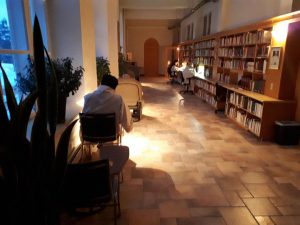 Monday 1st. April having arrived, the worst of winter having more or less ended, we see faces we have not seen in a while in the guesthouse. As one catches up with them, the positive dimensions of life—things having gone good for them—are often striking.

Tuesday, 2nd. The mighty Ford Lariat returned from the Miramichi today, having received some TLC from Towne Ford. Brother Leo has started reading one of the biographies of Dom Vital Lehodey (1857-1948) of Bricquebec. This led him to reflect on Abbots-General he has known, though Lehodey was not one. Dom Gabriel Sortais was an Abbot General very able to connect with members of our order locally; he seems to have had quite a lot of pizzazz.

Wednesday 3rd. Brother Glicerio renewed his vows for one year this morning. Quite a day of snow and rain descended on us. Brother Henry was able, however, to see his smiling dentist as scheduled, in Moncton. The ultra-modern professional building the dentist is in, with its endless glass, allowed him to take in nature’s splendor and gusto at a glance.

Thursday 4th. On roads still not great after yesterday, Father Roger made his way to Moncton today, and dropped in on Brother Henry, Sister Jean-Marie Howe, too. As we near the one-year anniversary of last cow milked, our accountant was in to hammer out some details of our 2018 accounts, with its unusual changes, auctions, sales.

Friday 5th. Brother Leo has taken back recitation of the first psalm after invitatory at Vigils, his favorite Office.

Saturday 6th. Brother Stephan has repaired the wheelie bin used for recycling. The schedule for Holy Days ahead was posted recently, and as usual it seems as though we are skidding, or gliding, through time this time of year.

Sunday 7th. Father Bede gave a good homily this morning. The best monk-homilists I’ve known also gave the briefest homilies, this was the case this morning. The exception would be the late Padre Angelo of Tre Fontane, whose wonderful, extempore homilies, accompanied by ample but never exaggerated arm gestures, were anything but brief—except that you knew he could have spoken longer still. And had the heart to.

Monday 8th. The statue of the Blessed Virgin Mary, tipped over by accident this winter, is just visible under the snow, her face looking up at the sky. A plume of smoke rose from the greenhouse this morning, Father Innocent now has his plants in. This evening we learned of the sudden passing of a member of Val Notre Dame, Fr. Lucien Noël, who had been here a few summers ago, and who was very much at the center of the monastic family in Canada.

Tuesday 9th. Father Innocent made his way to Moncton today, and saw Brother Henry. One of the hymns we take for the principal offices is ‘sur les chemins de dissemblance’, labeled as being suitable for Lent or Christmas; it is about dissemblance to God becoming resemblance, and a mysterious child awakening; or lost and returning; or wounded then rejoicing. 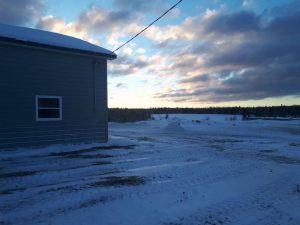 Wednesday  10th. The audiobook we are taking in at lunch, Pope Francis Happiness In This Life, includes many brief excerpts from informal talks, it is a book designed to sell and, in that sense, it offers signs of what people value in him. Maybe one reason people take to him is that he embodies an art of letting go they want and work for in their hearts, simply because they’re human.

Thursday 11th. At Henry’s this afternoon in Moncton, a 105-year-old was just getting back from lunch out with friends; this is how to stay happy over 100. The Cathedral exterior in Moncton is still being meticulously worked on, its scaffolding neatly arranged has come to seem almost an expression of the cathedral.

Friday 12th. Brother Glic washed the vehicles today. A young animal crossed the lake this afternoon, a usual route which within a day or so may no longer be passable as regards the firmness of the ice. It looked hungry but strong. Was it a moose, or a deer? Brother Leo decided it must be a moose, because a deer would have looked finer.

Sunday 14th.  A gerontologist/author friend of Brother Léo’s was by for a retreat, and was happy to see him again. It was warm enough, of a sudden, for people to sit outside and read.

Monday 15th. The statue of the Blessed Virgin Mary was put back upright today, in front of the guesthouse. 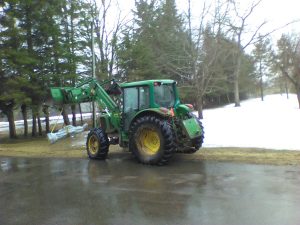 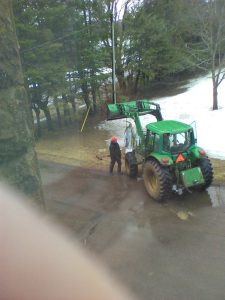 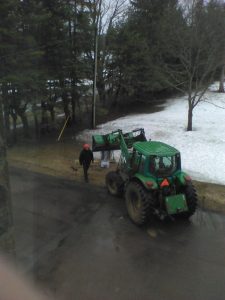 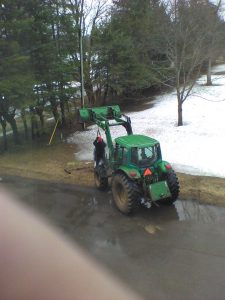 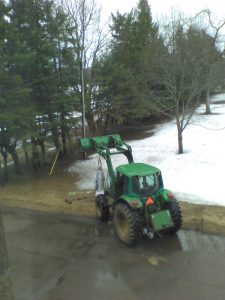 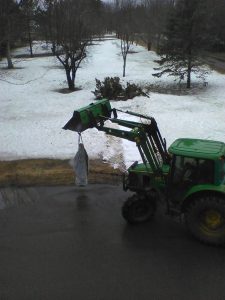 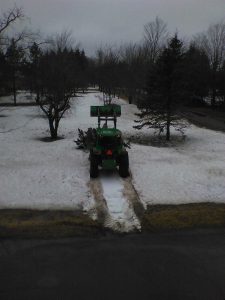 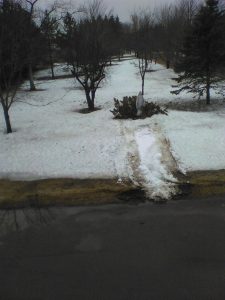 The week’s meal list for the guest house shows numbers rising to a dozen or so, during the Holy Days, then dropping a bit right after Easter morning.

Tuesday 16th. Father Innocent made his way to Moncton today, and after lunch with Brother Henry, took part in the Chrism Mass and related meetings. The evening Mass lasted two hours, then upon returning he lit a little fire in the greenhouse st 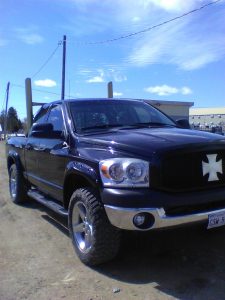 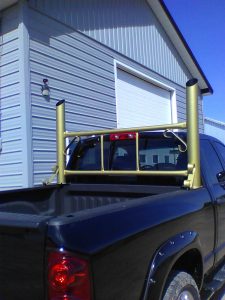 Wednesday 17th. Brother Stephan, who is an able welder, has further customized the new farm pick-up

Father Bede made his way to the Miramichi today for an appointment.

The guests are starting to show up, an interesting mix of spiritualities, backgrounds, personalities. A few Miramichiers are here to share some Holy Days and miss nothing, though their homes are not far away.

Thursday 18th. Singing practices are more frequent these few days. Brother Stephan made an observation today regarding the ways different,  smaller monasteries handle having fewer singers; he said sometimes one encounters smaller monasteries where they are trying to match the sound they once had by singing louder, but this does not help.

Friday 19th. Here at least the snow is still gradually melting and it is a gentler thaw than one often sees, a bit of vapor rising from some snow today, the earth smelling sweet under clouds and humidity.

Saturday 20th. I googled our monastery and saw that the map image now has a quite exact outline of our lake, allowing one to see where it goes, not evident to visitors out front. It says ‘Trappistes’ where the monastery faces the lake. the lake is labelled ‘Trappist Fathers Pond’ which I’ve never heard before, though it sounds nice.

Sunday 21st. With no dairy farm, no night duties, the Easter Vigil’s start time was pushed back this year to three AM, another cool Easter outside where the Easter fire was lit. There was a turn-out for this celebration comparable in number to a daylight service, and the feeling was nice. Morning Mass at eight. Over the week monks have been recalling the years when we experimented with a stand-alone celebration of light Easter eve, just before we (but not the flame) retired for the night. It was powerful symbolically in its own right, but did not catch on, seemingly. 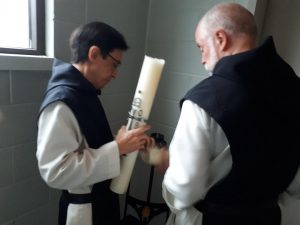 Preparing for the Easter Vigil – Br. Glic and Fr. Roger 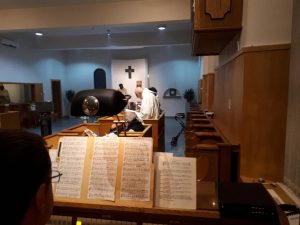 Monday 22nd. With several departures of guests in a few days, again it is striking, looking back, how much the monastery means to different people.

Tuesday 23rd. In Chapter, Father Innocent shared Pope Francis’ Easter advice: pack up your troubles in your old kit bag…for Easter, at least. It recalled a lifetime of exchanges, laughter and occasional unhappiness concerning obligations to be happy. A white-tailed deer showed up just south of the monastery, grazing in a field just beginning to sprout grass. It was keeping a close eye on its surroundings; too far away to photograph conventionally, it looked right at me in the window. I had to wait around in town for something today. Folks were asking me about changes, real or imagined, in religious communities here. As were cleared away some false ideas, not for long I suspect, it occurred to me that a hunger for truth, paired with an  aversion to truth, is what makes us gossip.

Wednesday 24th.  Brother Stephan took out for a test drive a plow attachment for the tractor which he recently finished making, in preparation for next year’s winter wonderland.

Thursday 25th.  Just as spring flooding hits its peak in the province, Father Roger had to go to Fredericton this morning for a poultry producers meeting. A half hour detour both ways due to closed roads, but he was on time for his meeting. Brother Henry saw his dermatologist this morning in Moncton, and gave me his opinion both on the art in the waiting room, and the late  film director Federico Fellini, whom Henry detests.

Saturday 27th.  It being Easter all week, we have had more singing than usual at Mass. There are some bags of mulch out front, different colors, in preparation for spring sprucing up. Brother Glic has been clearing away the branches on the ground in the apple orchard, but intermittent snow has slowed this down.

Sunday 28th.  Brother Glic worked on a Spanish sausage dish for lunch today. At Mass this morning, there was a faint smell of wood smoke from the green house stove. Nice. The 8:00 time slot seems to have perked up Sunday Mass slightly, as far as local community participation goes. It is nice to have Brother Leo chiming in once again to read the communion antiphon, beautiful texts this time of year especially.

Monday 29th. A pipe sprung a leak over the main stairwell to the west. Brother Stephan retrieved from the lake the floating cross monument to the late Father Didier of Aiguebelle. It had drifted from where it is usually moored, and was making its way towards the spillway.

Tuesday 30th. A professional musician is here on retreat. He likes to pray.  Work began on the grounds, involving several of the monks, and quickly the yard started looking less wintery.