Saturday, June 1st. Our bird feeder draws some songbirds, but the sisters’ feeders draw a greater variety of birds. 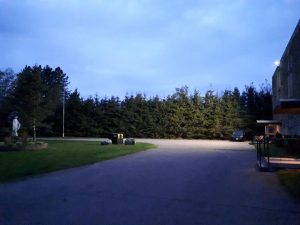 The night has become as bright as the day!

Sunday, June 2nd. A new floodlight debuted, lighting the area in front of the guesthouse through the night. The light happens to fall in a nice way on the statue of the Blessed Virgin there. At Mass, Brother Stephan played a lovely offertory, using a carillon tone. At lunch, we spoke for a change, putting Sunday music on hold for a week. This afternoon I was able to speak by phone with a hermit living in the city, who offers a fresh perspective on many things, including city life with its ups and downs.

Monday 3rd. Brother Henry saw his new neurologist today. What with retirements, and doctors moving away, this makes for his third neurologist over the years, as he’s dealt with Parkinson’s. Each doctor has had their own style, and taken specific paths as regards treatment. This doctor is another good one.

Tuesday 4th. In Chapter this morning, Dom Innocent continued to comment the Rule of Saint Benedict on correcting faults, alluding to the poignant and promising nature of being at an unusual moment in one’s life just as others, or life itself, call us to account.

Wednesday 5th . Brother Leo has returned to work at the reception desk, part-time. Recently, we had a European guest with us. That is relatively rare, though not that unusual. Rarer are guests from the USA, though the border is close by. Dom Innocent got into Moncton today to see Brother Henry.

Thursday 6th. The storage shed down at the grotto is being repainted a dark green. It fits so well in the corner there. This year, there are more tiny blue wildflowers than usual along the long stairway down to the grotto. 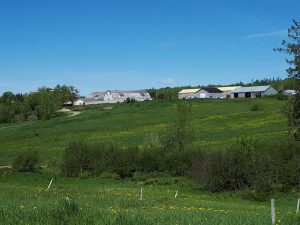 Friday 7th. The bank of our lake is a straight line parallel to the monastery and drive. A few trees from below have now grown to above the bank, seeming to come out of nowhere. When I asked to what degree the lake is artificial, and how the bank got to be the way it is, I found out from Brother Stephan that the cliff was created with large loads of fill dumped here courtesy of a CN Railway work crew, over a century ago.

Saturday 8th. We are drawing near the end of the refectory book on Queen Victoria. With her death, the people who formed the court around her appear in a different light, as world events give sign that empire as it existed then would not hold.

Sunday 9th. To mark the end of Paschal Time, we had a festive lunch with far-ranging conversation. I think we were also filmed. As we got to talking about trees, Bede explained the recent absence of eagles. He witnessed an eagle-crow aerial battle to rival the Battle of Britain, with our determined crows giving their all to defend their nest, which Steve says is huge, and hence their territory. Bede also says he has heard the coyotes singing at night, recently.

Monday 10th. This morning, Father Bede duly removed the icon of the Pentecost from its place before the ambo, as we return to ordinary time.

Tuesday 11th. In Chapter, Father Innocent mentioned the possibility of bringing in an external confessor for the monks, something we haven’t done in a while. Brother Stephan mentioned that the big red doors of the chapel, recently replaced, will be needing some help to protect them from water damage. The problem is run-off from the roof when the doors are fixed in open position.

Wednesday 12th. A guest is here who has strong memories of the monastery in the 1970’s and 80’s. That period seems like a defining one here, somehow. Perhaps it was partly the humility and humanity of the members who were around at the time, paired with the Church and civic culture of the day, which made the community’s encounter with the 1970’s and 1980’s in some ways a happy one. Happiness that’s lasted. 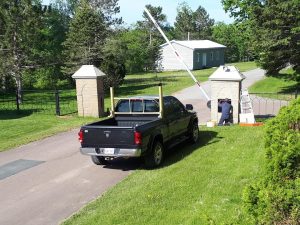 Thursday 13th. Brother Stephan this morning resumed work on the automated front gate. The Nelson Rural School Grade 5 French Immersion classes were here as part of their year-end field trip. They stepped off the yellow bus into something quite new to them. They asked many questions, and with goodness and gravitas of their own, had fun.

Friday 14th. One has to be on their toes to get into the car without mosquitoes also skipping in for a ride these days. Our new refectory book, God’s Smuggler, is off to a striking beginning. In style, it is somewhat reminiscent of All Things Great and Small, which we heard read last year. I imagine the smuggling in question will be of Bibles, but this remains to be seen. 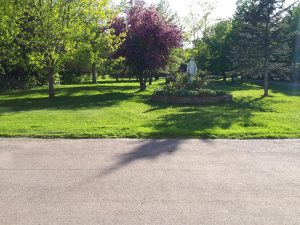 Saturday 15th. The tree which the late Msgr. Donat Chiasson planted in front of the guest house, when he was ordained Archbishop of Moncton in 1972, is becoming more lovely each year; he would have been pleased. Some hearing aid adjustments are causing a bit of noise recently, and it recalls monks of yesteryear and the striking song of their hearing aids.

Sunday 16th. Dom Innocent stepped over towards the pottery studio this afternoon, while other monks not seeing to duties cycled, or boated, or ‘chilled’. Father’s Day brought several fathers to Mass here this morning. A good-natured Acadian-American couple who are around for the summer also joined us. 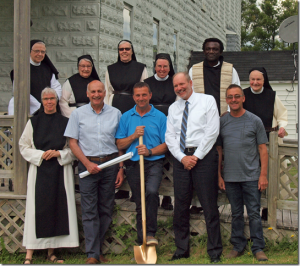 Inaugurating and Blessing the New Building Site at Assomption 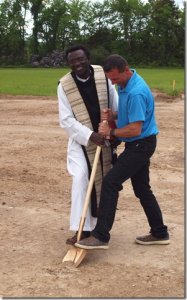 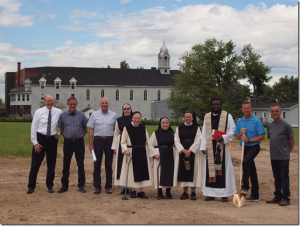 Monday, June 17th. One of our fleet of cats was taking it easy and taking it all in in the shade of a big tree to the north of the monastery this afternoon. Later, a retired farm hand drove by in the distance, slowly, slowly. Dom Innocent took part in a sod-turning and blessing across the road, where our sisters are realising their dream of building a new, smaller monastery on-site. In the age of photo-ops, this was a big one!

Tuesday, June 18th. In Chapter, Dom Innocent spoke of contrition as a healing sadness, and described love and prayer as forming a healing or ‘correction’ par excellence.

Wednesday, June 19th. Many hymns return with ordinary time; they are like old friends. Our external confessor was by, and even left autographed copies of two of his books. Brother Leo had an extra mural nurse by. She was fascinated by the monastery, extra-murals seem always to be such positive people. At least the ones we’ve had by. She says her French is not strong, and that the Miramichi twang more or less forbids the adoption of a pleasing French. Her impromptu 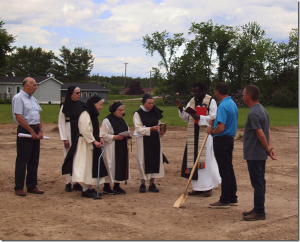 reflection surprised me, but perhaps shouldn’t have. The twang up there is nice.

Thursday, June 20th. Dom Innocent has succeeded in a) finding out how many phone lines we actually have and b) scaling back to what we need. In Moncton today, cheerfully, Brother Henry rolled on to the first of a series of tests for his new neurologist.

Friday, June 21st. The lake is pretty most of the time, but prettiest in a light rain, as today. 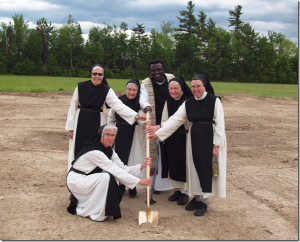 Saturday, June 22nd. Brother Stephan has replaced a wheel on our recycling bin. Our friend Peter re-appeared in our corridors, with a smile. He is here for a two-week stay on the monks’ side.  Shrubs are dry.

Sunday, June 23rd. After lunch, Brother Stephan took to the road, for a few days in Nova Scotia, where he has family, and where his family lived prior to his entering in the 1980’s.

Monday 24th. With Brother Stephan away, there is no organ accompaniment for a few days. This morning’s Mass was therefore simpler than usual, but the Birth of John the Baptist can’t not be beautiful, and striking. Work got underway in our cemetery today, on better anchoring of the crosses. This week, someone in town was talking about our late Father Edmond Richard (1911-2001) and said that in the 1980’s he was working with P. Edmond, when suddenly he came across him weeping. He asked him what was wrong. P. Edmond told him his intuition “the Church will soon be experiencing a very bad period.” 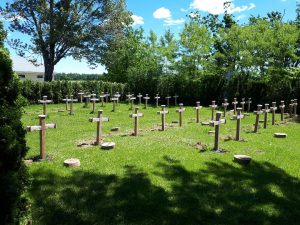 Tuesday 25th. In Chapter this morning, Dom Innocent continued documenting the ‘penal code’ of the Rule of Saint Benedict, recalling the strange fact that at one period in history, monasteries contained mini prisons for monks who’d really gotten out of hand.

Wednesday 26th.  Outside, this afternoon, you could hear only the sound of the wind in the trees, and distant traffic on the highway, with birds’ voices somewhere, gentle and strong. This evening, we had an impromptu meeting with a local government representative, the meeting was both pleasant and helpful.

Thursday 27th. Brother Léo finds the foliage on the trees unusually lush and full this year. Brother Stephan reappeared, and his journey seems to have gone O.K. In the past, he’s had to outrun hurricanes and so on while on the road. Dom Innocent made his way to Moncton today, and was able to look in on Brother Henry, who was interested to hear how the different monks are faring.

Friday 28th. Steve made a pitstop repair of a sit-down mower this afternoon. The summer schedule was changed slightly: our biannual regular visitation will be conducted a week earlier: in three weeks’ time.

Saturday 29th. We have been rich in solemnities, and today makes the last back to back pair of solemnities for the moment. We like a schedule of feasts that’s smooth, but it is not a bad thing to be tossed around a bit.

Sunday 30th. As our long driveway’s quality fades, nature pushes up through the cracks. It looks nice, but it will be time to drop some new paving around our little corner, one day. The lake is lovely; guests go over just to look out the window in the Chapel to see it. Most of the Chapel windows are old and clouded over, but this softness of the image is also pleasing. 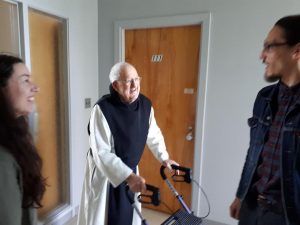