Tuesday 1st. The same two gentlemen are back to the second floor archives. This time instead of scanning our old photos, they are taking pictures of them with a camera that is fixed in place. The website they are creating with all the Rogersville history they manage to gather is www.rvnb.ca . They are inspired about getting this record of the area up and running; they hope to find a successor to carry on their work after them.

Wednesday 2nd. It is Take Our Kids to Work Day in Canada, and a Grade 9 student asked to put in a day with the workers on our farm today. He seemed to enjoy it, particularly putting fresh straw in the calves’ pens, and could drive our Kawasaki Mule at a brisk pace.

Thursday 3rd. People were parked on Rogersville’s Main Street this morning, stopping to take pictures of the demolition of the presbytery in town. In Moncton, Brother Henry visited Saint Bernard’s Church for the first time. It happened that the Parish Priest walked by as we arrived, so he showed us in. Henry first met Father Carroll during his Pre-Ordination retreat at the monastery in 1978.

Friday 4th. A package has arrived from Coalville, England: our new robes and scapulars. They are very nice, and Mount Saint Bernard’s Father Andrew even sewed our names into them.

Saturday 5th. A few mosquitoes manage to live inside here year round, thanks to the Calvaire micro-climate. One of these mosquitoes was flying—barely—inside the elevator this morning. It is a quiet winter for them, to say the least.

Sunday 6th. Father Roger replaced Father Clovis for Mass at the Sisters this morning. At lunch, we listened to Skeeter Davis songs including her 1962 hit, “The End of the World.” 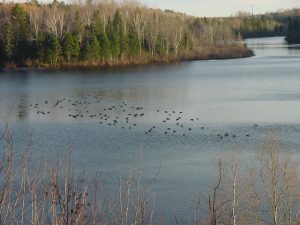 Monday 7th. It was frosty out this morning. Beautiful moon and sun these days. Brother Léo’s calendar watch has been giving him trouble; giving him the wrong day, necessitating a bit of re-winding. A Parish Priest is here for retreat. It is always striking to have someone like that here praying with us.

Tuesday 8th. Wayne the truck driver arrived to pick up our milk around 5:30 this morning. He connects a hose to a little pipe on the tank for this. For storing/cooling, the tank is closed by a faucet and a cap, where Wayne connects. He was worried he would need help with the hose, as he pulled a muscle, but he was O.K. This morning we shipped 4,600 litres. For those who like trucks, this one is pretty cool. Brother Stephan explains things for us this way: “He has a vacuum impeller type of pump that’s on the truck. He both loads with it and unloads at the plant. It’s a bi-directional pump. His truck holds about 30,000 liters, or 8,000 gallons.”

Wednesday 9th. In Chapter, Dom Bede spoke about Saint Benedict’s vision of Lent. Someone asked how long Lent as we now know it has existed. Dom Bede said that in the West at least, Lent probably developed gradually. According to the bright lights at Oxford, Bede is on the mark: Lent lasted only a few days a year in most of the West during the first three centuries. 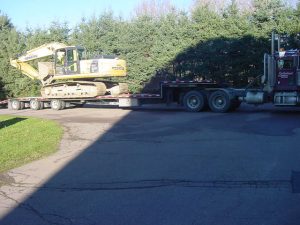 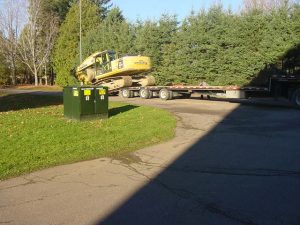 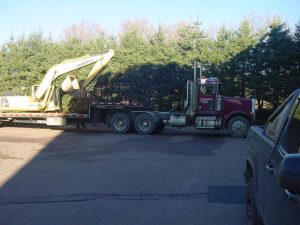 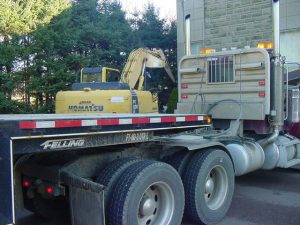 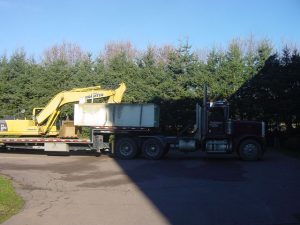 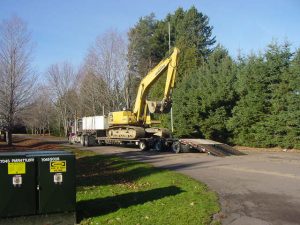 Friday 11th. Suddenly, from a chapel that is empty for Vespers, our chapel has different people from different places in it.

Sunday 13th. Another Parish Priest has been by. That makes several in a row recently. This one is doing his own study of the cursing psalms. He pointed out that certain monasteries omit certain cursing psalms, or verses of psalms, whereas here we sing them integrally.

Monday 14th. Josh our geo-thermal technician was by today to fine-tune a few of the heating units. Problems have been few.

With their bright new robes on, monks here could pass for monks of Mount Saint Bernard, UK. What does British tailoring offer that is different? The robes fan out more. The collar is looser and at the same time a bit higher. A collar with character.

Tuesday 15th. Brother Stephan attended the funeral of John MacDiarmid in Napan today. Rémi, our longest-serving farm hand went with Steve. John had known our monastery and its farms for decades, being familiar with our 1950’s pig farm and all ventures thereafter. He was unreserved in speech in the way loveable farmers sometimes are.

Wednesday 16th. In our orchard there are still a few leaves on the apple trees, gold and orange. Apple sales continue, five dollars the bag, people are respecting the honor system, the little tray with five and ten dollar bills in the guesthouse entranceway.

Father Roger today learned that his mother’s health had taken what seems to be a final turn for the worse. He hastily prepared for a return to her side in Peterborough Ontario.

Thursday 17th. As Father Roger left after Vigils for the Moncton airport, he noticed that 50 pound sacks of potatoes had appeared, arranged against the glass walls of the guest-house entrance. Who gave them to us? Brother Léo never found out. Maybe somebody knows.

Friday 18th. A Priest from PEI gave us a gift basket with: 12 grain bread with pumpkin seeds from Kildare Capes PEI, some fudge from O’Leary, Squeak-ies snacks made by Island Artisan Cheesehouse in Mont Carmel, plus wines from Montague and Cornwall.

Saturday 19th. Our 2017 Christmas cards are now available to monks for sending, French and English versions, by Dom Bede. Maybe you’ll get one! This year’s cards feature photos of our new road sign on the front. A snappy card and a worthwhile celebration of the artistry of Michael Perry, who created the sign.

Sunday 20th. Brother Henry came by, and took time to look at how the trees around the monastery are now doing. The decorative boulder next to one tree, he explained, was moved there with a tractor by a monk unhappy with Henry’s arrangement of things, under Henry’s surprised eyes. It seems that Frère Urbain had the strength of an ox but the heart of a landscaper. 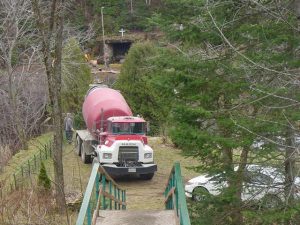 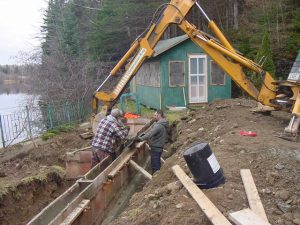 Work at the dam.

Monday 21st. Father Clovis, chaplain to our Sisters, continues helping out at the Eudist Parish in Havre Saint Pierre, not far from Sept-Îles, Québec. Must be awfully cold there in the thick of winter.

This morning, chicks arrived to very well-heated barns. Some workers enjoy stopping into a barn as warm as that, others find it a bit much.

Tuesday 22nd. Carolina the Cow had her calf on the weekend. It was a bull: that’s eight bulls in a row. Several other calves are being moved from their little white hutches to the heifer barn. Afterwards, a tractor lifts the hutches, the ground beneath them is cleared up, and fresh hutches are prepared for upcoming calves. Each hutch has a number on it to help us keep track of who is where when there are several births in a row.

Wednesday 23rd. Father Innocent has made some new pottery which we will be using ourselves instead of selling: cups and bowls. The bowls are brown with a turquoise color on the outside. We are not lucky with dishes, and seem to chip or break or misplace them fairly regularly, hence the need for a fresh stock.

Thursday 24th. Happily, Father Roger’s mother’s health has taken a sudden turn for the better. She is out of hospital, back to the seniors’ residence where she lives.

In preparation for winter, this afternoon we put the big red basement door back in place, after taking off the wooden screen door.

Friday 25th. A topic of discussion this week has been: the group—that is to say, the group that are coming here on retreat this weekend. How many are they? Who are they? Is it really a full house, as indicated in Brother Léo’s book? The cooks especially want to know numbers so they can plan things.

Saturday 26th. Father Roger returned after having spent some important days with his family. Soon, he began looking into the accounts, his main work. Advent got off to a good start here, the group having amounted to three people after all. Maybe the others were afraid it might snow?

Sunday 27th. As Sunday Mass rolled along, all was quiet outside. Down at the grotto, work has begun and the scene is as it were frozen, a work in progress: a new retaining wall to the right of the dam is taking shape nicely, this should hopefully tug things up and keep them from pulling apart any further. Black-capped chickadees seem to enjoy the cold air and solitude; they were there, singing their pretty and soft song. They always accompany us through winter.

Monday 28th. Father Clovis’ absence means the chance for one of us to pray with our Sisters each day, as they say Mass there. Years after the refit of their Chapter room as a chapel, it is still striking to see how successful this was. Walking towards the sacristy one passes a little library for their guests. Mainly spiritual, the books also bear witness to the sisters’ love of nature, and their contact with writers like Canadian poet and novelist Anne Simpson.

Tuesday 29th. The lake froze over for the first time this year. The ice was so thin that it was able to mirror the treeline.

New books have been put out for the monks to choose from. One is by Thomas Merton: “In The Valley of Wormwood”, some of his very first writings as a monk: brief accounts of Cistercian Saints he was asked to draw up for novices, now published outside the monastery for the first time. Our friend, the late Father Chrysogonus Waddell of Gethsemani once said that these texts always remained his favourites among Merton’s writings.

Wednesday 30th. First snow of the year requiring plowing. More calves have been born on our farm, and the trend now seems to be towards tiny, pretty calves.