Wednesday 1st. With a new month ahead of us, monks select dates ahead of time on the vehicle sign out sheet. Father Innocent will be going to Quebec in May. Other monks have medical appointments. Victoria and Abdul: The True Story of the Queen’s Closest Confidant is the new refectory book. It is quite detailed, it is also smoothly written; a winning combination of qualities for refectory books.

Thursday 2nd. Working at the door, Bede helps guests check in and out, and sometimes answers questions regarding which flavor of Spencer preserves they should buy. Many of the flavors are new ideas to people, such as Quince Jelly, or Elderberry Jelly. The preserves sell well, but not as well as the honey. 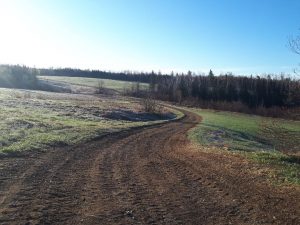 Friday 3rd. In town, the new director of catechesis for the parish said she was happy with her first year at the post. In our yard, Brother Glic has been carefully seeding patches of earth where the lawn had not made it through to spring.

Saturday 4th. Father Roger pointed out how nice the daffodils are this year. Brother Stephan has been building up the level of an important dirt road, which goes downhill south-east from the monastery, over a water drainage pipe, then uphill through the woods. In years past the road being washed out by overflow  has been a problem, because the water from quite an area of woodland flows down to this point. 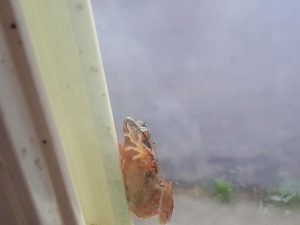 Sunday 5th. As I took the recycling out, some hot rodders were scooting around. Not hot rodders, exactly, just furtive young people who zip around in dark-colored vehicles. It struck me that on some level there is no distinction any more between Saturday night, with its feeling, hope, partially; and Sunday morning, bringing quiet and, desired or not, peace.

Monday 6th. Some of the monks voted in Collette today, on a proposed regrouping of local communities into one; the proposal was soundly defeated. The plan seemed a little sketchy, but some say an agglomeration will be unavoidable, eventually. Father Innocent went to Moncton today, to get equipment ready for work on the apple trees. The orchard cannot wait, as it reaches different stages of growth.

Tuesday 7th.  The low hedges along the south side of the monastery have been trimmed. The place looks sharper now. On the front lawn, there are still a few patches of snow left.

Wednesday 8th. With the heaters off in the chapel, the silence, and the acoustic, and the liturgical flow are a bit different, the ‘faces’ of the wall-mounted heating units now blank. Our chapel looks nice with some flowers in it.

Thursday 9th. The Easter treats now form a minimalist setting, mainly some forlorn chocolates and the Jolly Rancher candies. These seem to have lost a bit of their éclat since their heyday in the 1990’s. There are still some treats from Christmas on the table, most notably, a foil-wrapped, budget chocolate Santa who has been looking at us for so long. His eerie stare was finally broken this week, when someone dug in, and broke the foil.

Friday 10th. A King’s College, Halifax student is with us for a few days, getting caught up on his thesis, on the Eucharist.

Saturday 11th. Father Innocent attended a Diaconate Ordination in Moncton today, as he was in town to look in on Brother Henry. Brother Léo keeps a sharp eye on the world outside. He says that spring, even on a nice day, is not much to look at. However, the 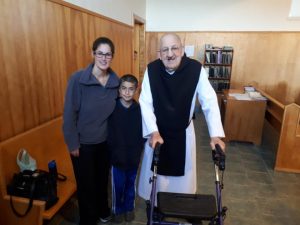 re is a bit more activity outside, which is nice all around.

Sunday 12th. At the end of Sunday Mass, all the monks proceed out. Once we enter the sacristy at the back of the Church, all bow towards the crucifix. Brother Leo this morning asked, as he often does then: “Is it…over?” After Mass this morning he said hello to a family with ties to his own, the youngest present being the great-grandson of Léo’s first cousin, on his mother’s side.

Monday 13th. Father Innocent left this morning for the OCSO Canadian region meetings at Val Notre Dame (formerly Oka) in Quebec. He got away early, in the Kia; meetings start tomorrow, I guess. Brother Glic worked today in the green house, then on the grounds, where he gathered leaves from last fall. On the road, it was striking today, after an epic winter, to see flags flying again over homes. Canadian and Acadian on the same pole.

Tuesday 14th. A bird feeder which has been sitting inside was put up for the first time. It is our only bird feeder. Our refectory audio book today provided some fresh and accurate ideas on how to pronounce Rudyard Kipling’s first name. The first syllable should rhyme with Bud, not Dude. 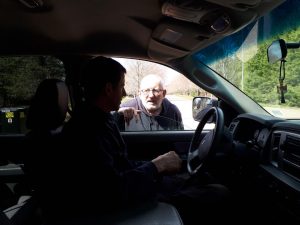 Wednesday 15th . Guests who return off and on year after year find the place (peaceful as it was) more peaceful. I noticed something different recently, too. Maybe it is partly because this is our second May without dairy farming. The first such spring was quiet indeed, but the absence of our ordinary was so stark a contrast that everything seemed intense; even just looking around, out back. Father Roger has bought a new salad spinner, it’s a nice one, they break fairly easily so we have had a few. Today was Roger’s birthday which meant, chocolate in the cake.

Thursday 16th. Just as a group of retreatants checked in, two university professors arrived: here for a tour of and first look at the monastery, led by Father Roger. They were briefly mistaken for members of the guests’ group.

Friday 17th . We have had no news from the superiors’ meeting, but it is nice to think of them there together. Outside, temperatures climb just a little above zero, and we still get a dusting of snow. The recently born birds bounce their way into a world completely fresh for them. In our salads now, the cooks are using arugula and radish fresh from our greenhouse.

Saturday 18th. Father Innocent got back by mid-afternoon, rounding out the troops. Though it is not warming up, this morning around dawn birds for the first time this year sang en masse, as though to say, this is a big deal, let’s sing as much as we can; it’s really spring.

Sunday 19th. A group left, and now often one man only is present in the guesthouse. He is happy, and as such, having only him is like having more than him. 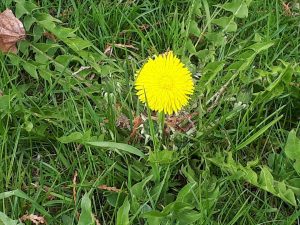 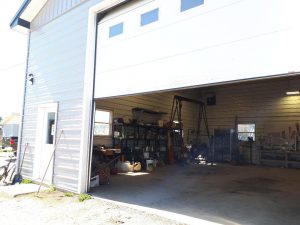 Monday 20th.  Bishop Robert Harris joined us for midday prayer and lunch today, something we’ve been able to look forward to annually, during his 12 years in Saint John. He values the monks and his time here, as well as his friendship, represent another way for us to step into the Church.

Bishop Harris of Saint John NB at lunch with the community.

Tuesday 21st. In Chapter, his first since the regional meeting, Dom Innocent shared a presentation of Vultum Dei Quaerere and Cor Orans, documents from the Vatican on the subject of women’s contemplative life today, as these documents impact our Order and its legislation.

Wednesday 22nd. Father Roger flew away from a soggy New Brunswick to Ontario, for a short visit. He left me with the grim forecast that is making the rounds here: soggier spring still, followed by another ultra-dry summer.

Thursday 23rd. Brother Leo had an eye check-up in Newcastle today. As we waited, we were able to compare the singing of Gene Autry with that of Roy Rogers. I was taken aback at the degree to which Gene (Brother Leo’s preferred singing cowboy) outshone Roy. Brother Glic has been spreading lime on some parts of the lawn. Dom Innocent trimmed the various greenery surrounding the statue of the Blessed Virgin Mary, out front, it looks nice.

Friday 24th. Dom Innocent took part in a celebration in Saint John, for Bishop Harris’ fiftieth anniversary of Ordination. Brother Stephan brought his welding equipment to the front gate, to work on the bar so that it can lift to open, drop to close. The last while, the bar has been fixed in upright position, the sliding gate original to the brick entranceway having been damaged by a vehicle. 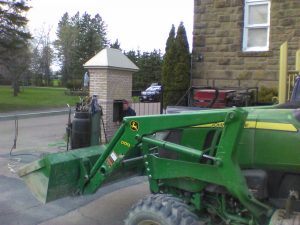 Work on the enclosure barrier 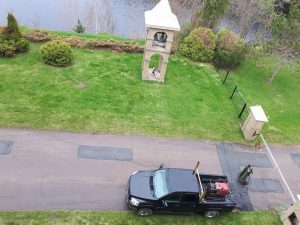 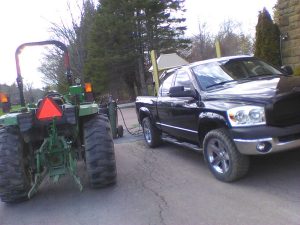 Saturday 25th. With the cool temperatures, days growing longer doesn’t seem to fit in. A few guests have been by for their first stay, and their fresh perspective on the monastery is instructive.

Sunday 26th. The farmer leasing our fields did some corn planting today.

Monday 27th. Going downstairs for breakfast this morning, in our brightly fluorescent-lit refectory there was the smell of burnt toast. So many memories of good mornings were evoked by the smell. Just before Mass this morning, a mother and daughter often present together asked Bede for a blessing. He was on his way to the vestry, where he puts out vestments day to day.

Tuesday 28th. The reception desk office continues to gradually change in appearance, but some images Brother Leo had on the wall remain, like the lenticular (3D) Our Lady of Guadalupe, or an original painting of a village in a winter valley. In chapter today, Dom Innocent spoke about the recent regional meeting of superiors, and the tomorrows our Order is considering; as well he spoke about how Canadian monasteries respond to today, by accentuating contact between our small houses.

Wednesday 29th. Just before things (hopefully) warm up, the little black flies returned, to the swallows’ delight. With these little things present, the wide open seems a bit less open. Father Roger arrived at the Moncton airport this evening amidst the little, daily flurry of travellers from Toronto. His visit to his home province went well, and he was impressed by an especially vibrant Parish in North York.

Thursday 30th. Our refectory reading, centering on Queen Victoria’s inner circle, recalls remarks of every sort imaginable regarding the British crown, heard in the course of a lifetime in eastern Canada.

Friday 31st. Driving into Moncton, the road dips then rises to the tail end of the Appalachians, and Lutes mountain; this morning, the wisps of rain clouds there were so black, I thought there was fire near the mountain somewhere.