Friday 1st – Canada Day.  We started listening to audio books during lunch, bought from Amazon.  The start book is: The Deep South, Four Seasons on Back Roads by Paul Theroux, published by Penguin in 2016.  At one point during the day the outside bells ceased to ring.  It would be confusing to say: “They went on strike.”  But Brother Stephan soon had them working again.  Father Graham came back from Prairies in time for None and went straight out afterwards to milk the cows.

Saturday 2nd – The day was rather wet and ended with a minor thunderstorm as we went to bed.  Brother Stephan is beginning to wonder about the effect of the lack of heat to help the crops grow.

Sunday 3rd  – The abbot thought that we should mark the Sunday between Canada Day and the Fourth of July by certain festive elements, including music with an American bias.

Monday 4th. In Chapter, Father Graham told us about his visit to Prairies. Our Lady of the Prairies is considered by some to be one of the more out of the way monasteries in our Order. Like our own monastery it is just off a main road, with a small community close by: smaller than Rogersville. The visit went well. Father Clovis has gone home, North of here for a few days entrusting us, that is to say entrusting Brother Glic with care of his new compost pile. However, in his absence no one can find the pile, so that plan is off for the moment.

Tuesday 5th. Our red three-wheel bicycle has been rolled out of the garage and left by the back door, to free up space for moving tractor, mowers, et cetera in and out of the garage. Our three car garage houses our car (a Kia), our Ford truck and some equipment for the grounds and garden.

Wednesday 6th. In today’s segment from the audio version of his travel book about the American South, Paul Theroux repeated his claim that Americans are the most inscrutable of peoples. Is this so? John McDonough, the narrator giving voice to Theroux’s reflections ably breaks into bubbly southern accents for the various people Theroux encounters in the book, acting out their exchanges. Brother Léo gets a kick out of this.

Thursday 7th. Père Clovis is back and smiling. Today, Father Innocent made his way north to Miramichi, but was stopped en route for ten minutes by roadworks. A lot of this road is now in fine shape. As it is relatively unpatrolled, those who wish to can move along at a brisk pace, nearing Miramichi.

Friday 8th. From Petit Rocher, a flatbed truck arrived on the farm this week with seventeen 500 kilo bags of fertiliser. In Chapter, Dom Bede asked our prayers both for Tre Fontane, which is at a turning point and today celebrates the memory of Blessed Eugene III, Abbot of Tre Fontane become Pope; and for Texas, where news of terrible shootings recently broke.

Saturday 9th. The new door is now in place in the milk house, and the wall is up and nearly finished. A very good job. The new bulk tank has been polished with some stainless steel polish. The tank works out well.

Sunday 10th. Brother Henry joined us for Mass and lunch, on the eve of the Feast of Saint Benedict. Father Innocent mentioned at lunch that he was looking for an extra pump to push water through sprinklers for the garden.

Monday 11th. Brother Henry went through a tooth extraction in Moncton today: smooth as silk. A baby tooth is next up for removal. Maria Léger dropped by the monastery today, to pick up proceeds from sales of her CD Comme elle est belle ta lumière, and unsold copies. We only sold three, but the CD is good and has sold well elsewhere. Maria, who was raised in the Grand Digue area, told me how being near the water formed both her, and her late father. He was a quiet lobster fisherman possessed of an unbroken peace.

Tuesday 12th. Brother Léo went to the walk-in clinic in Newcastle this evening to see about some discomfort in his abdomen, the news on that being good, if a little sketchy for now. The people in the waiting room were familiar with one another, unfamiliar with us. There were some long faces, understandably, but smiles when Brother Léo walked by.

Wednesday 13th. Father Innocent has installed a big water reservoir next to his garden.

Thursday, July 14th. It’s become hot outside. The monastery tends to stay a lot cooler than the guesthouse. All the guests are gone now. Our friend Father Wesley Wade left this morning after another good retreat. He is perhaps the monastery’s most constant Priest-guest these past twenty years.

Friday 15th. The best time of the day for a walk these days seems to be just before dawn, before the sun heats up. This morning there was a strong, mild breeze through the lines of trees out front, and the occasional firefly flying low. Disturbing news broke this morning of killings in Nice, France. In the pharmacy in town, people at the counter quietly asked me if I’d heard about it, explaining that the pharmacist’s nephew was only a short distance away from the attack when it happened, fleeing for safety.

Saturday 16th. As the humidity increases outside, our hardwood floors creak more, and it gets harder to avoid making noise/possibly waking someone up. Today, some gates let go in the heifer barn, necessitating a re-shuffling of the herd. The cows each have their own section in this long barn, according to their age but with the gates open they’d mixed together. 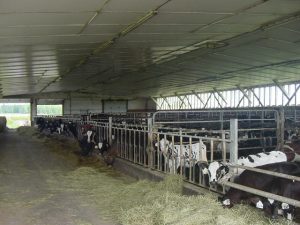 Sunday 17th. Father Innocent is working on a new road sign announcing the sale of pottery inside. Another sign is to debut this summer: our new road sign, to replace the brown one dating from the 1980’s. Dom Bede set out towards England then Rome, Italy after Mass this morning. Bede concelebrated here, said Mass at the Acadian Monument in Rogersville, then got a drive to Moncton from John.

Monday 18th. Father Roger is getting out of the accounting office to mow, and lawns to mow do not lack. In Dieppe today, Brother Henry said he was happy to have actually seen a Roy Rogers film. It’s the first time since Henry’s youth. This brought to mind Brother Léo’s take on Roy Rogers: a bit of a show-off, compared to Gene Autry. I guess Autry alone had the reserve one could wish for from a singing cowboy. Father Sloan, a co-resident of Brother Henry’s was around so I asked him who was his favorite: Roy Rogers, or Gene Autry. “Gene Autry”, he answered without hesitation, declining to explain way. “These are delicate matters”, he said.

Tuesday 19th. Dom Bede was at Mount Saint Bernard Abbey in England today, hoping his luggage would arrive soon. Here, Brother Glic printed out his boarding passes for tomorrow evening’s train ride to Montreal. Father Roger went to Miramichi this morning to get a new pressure washer for the chicken barns. Unfortunately, he had to return the machine this afternoon, as it was missing some parts.

Wednesday 20th. Brother Glic got away on the train this evening, in order to wake up in Montreal tomorrow morning, and be transported from there to the place of a family reunion. It is midway between Montreal and Toronto to make things easy for family in both cities.

Thursday 21st. Dom Bede has found a source of new robes for us: Mount Saint Bernard Abbey in England. Their Father Andrew is still making robes, happily. When communities in our order were larger it was more common than it is today to have a monk who’d been taught how to make robes. At Mass in Glic’s absence, Father Roger is acting as altar server, with Father Innocent our sacristan setting up the altar for Mass.

Friday 22nd.  Plenty of hay is making its way into our barn, one big round bale at a time. The Church has elevated the memorial of Saint Mary Magdalen to a Feast and today was our first time celebrating her this way. Like the Apostles, she now has her own antiphons for Vigils, Lauds and Vespers (taken mainly from Easter antiphons already in use), Gloria at Mass, Gospel at Vigils.

Saturday 23rd. After a sunny day, a sudden downpour yesterday: thunder shower, as would be repeated tonight. Clear skies resume almost immediately. The lake is maybe churned up by the rain, because it’s become a brighter brown.

Sunday 24th. Father Innocent said Mass in Rogersville this morning, leaving five of us here for Mass. There were a lot of people at Mass: old friends; the sister of the late Dom Alphonse Arseneault; new faces we would be hard pressed to place.

Monday 25th. Our raspberry U-Pick is up and running for the season. Neighbours’ raspberries have yet to really make a showing, but ours are abundant. The policy this year: pick what you want, keep half, give the other half to the Trappists. Not far from the monastery you can often see someone, usually an older person, quietly working away among the raspberry canes. It is a peaceful sight.

Tuesday 26th. Father Roger had some visitors today, old friends who showed up on short notice. This evening there was an unusually bright rainbow over the lake. In fact, it was almost too bright to look at comfortably. Conditions here remain sunny, very humid, some rain then right back to sun: a little like being in the south.

Wednesday 27th. A summer cold has begun making the rounds.

Thursday 28th. Brother Léo headed in to the Miramichi for a routine test this morning. Their machine was broken, the repair time for it a little uncertain (an hour? two hours?) so we just turned around and headed back. This afternoon Brother Glic returned to the monastery by train, it was running an hour and a half late. A departing retreatant was taking the same train, Rogersville to Halifax.

Friday 29th. The geothermal system has been switched on: not for heating or air conditioning (that’s not installed on it) but so the fans can get the air circulating.

Saturday 30th. Justin, our youngest farm employee, has gone to Moncton to take in the Motocross event there. People have been wondering just where Bede is at in his travels. Word has it he is still in Rome, Italy.

Sunday 31st. A few cut flowers were added to the chapel, using empty votive candle bottles as vases. Looks nice. Brother Stephan ran across something interesting on the internet recently. A professional writer who has devoted years to travelling wrote something about her 2012 visit here. It is a good witness to how interesting and alive our guests are, and how special time here can be. If one searched “wandering not lost monks of rogersville”, they’d see it.