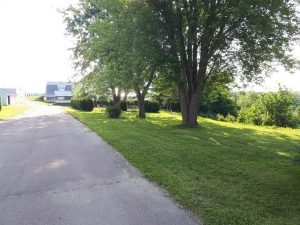 Thursday 1st. Today, Brother Stephen hauled a fallen tree uphill out of the grotto. A guest was struck at how evocative their return to the guesthouse was, different details of the surroundings clearly evoking moments passed here years ago. Outside, the latest wave of cats is turning out better hunters than we’ve seen in a while.

Friday 2nd. We have been having some fresh swiss chard for lunch. Our new refectory book ‘First World Flight’ does not lack dramatic moments, and its specific focus, coupled with the aviation fan’s perspective on things, offers a unique and clear way of looking at some very important years in world history.

Saturday 3rd. A government official was by this week to look at commercial operations with us. Also this week, Innocent and Steve checked out a potential new vehicle. Brother Leo has had a rough few days, as he is now suffering from shingles.

Sunday 4th. The light is changing as August moves on, breaking  the timeless feel of sunlight and heat, though these persist. Sunday evening means Eucharistic adoration and Benediction, a way of ending the week which in a way gathers all the moments of the week into one.

Crosses in the Monks’ Cemetery 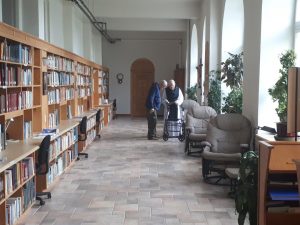 Seniors in the Scriptorium

Monday 5th. Brother Leo is resting up from his case of shingles. Some people from Ontario visited the monastery  today and as we were leaving lunch and the dish work, were sitting praying in the Chapel. Father Jason Touchie arrived for a retreat, he spends most of the year in Rome, Italy. The little roadside box for our French and English newspapers has gotten knocked on its side somehow.

Tuesday 6th. Christ’s Transfiguration, with its blend of Mysteries, was celebrated. Jason was struck by the comparatively slow pace of life in Rogersville. In Chapter, Dom Innocent continued commenting Saint Benedict’s chapter on the monastery’s cellarer, noting its reference to the emotional climate of the monastery.

Wednesday 7th. In what has been a quiet lead-up to the Assumption, some folks at least showed up for the Office of Sexte today. Because of the Assumption’s cultural importance here, its approach brings a feeling both of freshness, and of history or roots.

Thursday 8th. Parents Boyd and Jeannette Touchie are now here. Humankind conquering the air—as recounted in First World Flight which we hear read in refectory—was a happy but also an unhappy breakthrough, given the context of war. This week, we also learned from the book how one becomes a great race car driver; it is a question of training oneself to “think fast but react slowly, smoothly and deliberately.”

Friday 9th. A wall is being knocked out between two rooms in the annex, joining them into one to create a space for the exercise treadmill. Business meetings were held this week, among ourselves, and also with some outside consultants. We received a nice invitation to a barbecue at our Sisters next week on the Solemnity the 15th.

Saturday 10th. On a bike expedition , Bede was able to ascertain that nearby corn fields are doing wonderfully this dry-ish summer. The grotto, which the monks rarely see, is drawing many visitors, causing some to wonder, what exactly is the draw?

Sunday 11th. Jason sampled a donut from Canada’s coffee shop empire, but found it much too sugary. 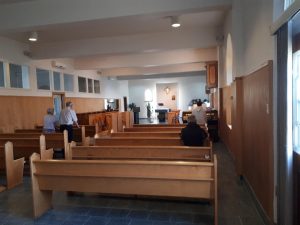 Monday 12th.  As Monday morning quietly unfolded, Brother Leo had to return to the Miramichi hospital. Perhaps it is the same elsewhere: ambulance attendants around here are cheerful, almost like family, and this can only help, health-wise. At the hospital, as Leo waited to be seen by a doctor, another patient with a difficult story to tell gravitated towards him and, talking, was able to smile. Leo returned here in the evening, which was better than he had hoped for.

Tuesday 13th.  At Chapter meeting, we began to discuss the visitation card, and a theme raised therein (a recurring one) communication. The discussion revealed a richness of perspectives regarding this topic. The guesthouse is filling up for the solemnity the 15th.

Wednesday 14th. This morning, the walk-in freezer failed, but the technicians were here in their distinctive truck very early in the day to set things straight. New Brunswick, and Rogersville, are friendly enough all the time, but with the Assumption near at hand, it is as though walls had fallen which we did not know were there.

Thursday 15th. Just before midday it was time to make our way to the Sisters. It was a near-perfect summer day there, and two picnic tables (one extra-long) accommodated us all for lunch, in the shade. Their new monastery was taking shape in the background, and things were peaceful. It was our last time praying the Office with them in their current Chapel. Laughter aside, there is much to be gained talking with the Sisters, and relatively few occasions to do so. Perhaps this factor makes one more attentive.

Friday 16th. This week, Brother Glic cleared away the growth from in front of a boulder  monument to the monks. Also, growth was trimmed around the Sacred Heart statue, and Brother Steve hauled away an impressive load of this cut brush. 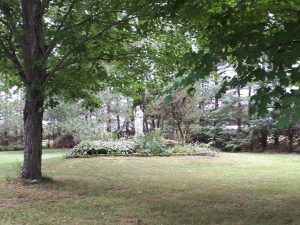 Saturday 17th.  Brother Steve is reworking the road at a crucial point, where the now-unused cow tunnel passes under the road. Brother Leo is making his way through health trials with wisdom and, often enough, humor.

Sunday 18th. Among the unusual mix of guests this week was one from New Jersey, Brother Stephan’s native state. He brought Steve some nice Jersey keepsakes. Wood for repairing the fish ladder was needed again this year. Near the fish ladder, a guest camped out for the night this week, successfully, though some thought raccoons alone would be enough to spoil the plot.

Monday 19th. Outside the chapel, the acoustics of late August seem perfect. Maybe it is the damp and still, and the warm night air this time of year; perfect somehow for hearing the crickets, or a lone bird’s one note.

Tuesday 20th. At Solemn Mass for Saint Bernard, we sang the Cunctipotens Genitor Deus Kyriale, which is one we do not sing too often. It is nice, of course. More Saint Bernard’s day greetings arrived than might have been expected, from various provinces and countries. We managed to contact the present-day makers of Monacad balm, once commercially produced here. This is good, because people seek Monacad off and on year in and out, and think we must be au courant of things Monacad.

Wednesday 21st. A young Catholic from the city is here for a bit of solitude. As they sat in reflection in the Chapel, I wondered: what is it like to be a young Catholic in the city, in 2019? Dom Innocent had an eye exam in the Miramichi today. Brother Stephan attended a funeral in Rogersville this afternoon, for one of the founders of Les Amis des Trapp 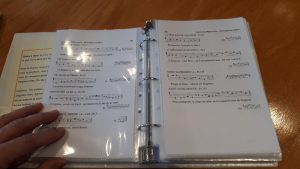 istes association of years past, Lucie Thébeau. She radiated happiness at those first association meetings; it was encouraging for the superior at the time.

Thursday 22nd. It rained, and it was nice to see wet pavement again. At Chapter, we were presented with our copies of the new, two volume Mass books, designed by Father Bede. It is all there from the old books, except for pages we had not sung year after year. 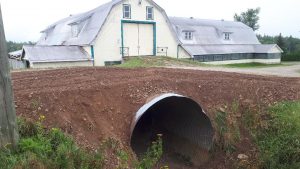 Friday 23rd. Brothers Stephan and Glic put finishing touches on road repairs, the crushed tunnel underneath the road now being held up by a wooden beam. The Keurig coffee machine failed, mysteriously, during routine cleaning. Brother Glic redressed the situation by unplugging it and plugging it back in again. Visitors from France glimpsed Calvaire for the first time, inside and out.

Saturday 24th. It was a misty August morning. Faint and brief birdsong, on such a morning, is perhaps the loveliest sound they make.

Sunday 25th. Bede’s homily, on the danger of closing one’s self out of heaven, got people’s attention; it made me think how senior Priests are the ones able at times to tackle topics people may be uncomfortable with.

Monday 26th. Father Bede gathered the community wash from the laundry bins on the third floor and in the basement, and began the weekly wash. Later in the day he was back to the front door, where sales of jam and honey continue good. I was in Moncton today for a funeral, in my habit, and was surprised at the degree to which people who recognise the habit remain captivated by news stories on us from a while ago; sale of the dairy herd in particular. The thought of that change is fresh in their minds.

Tuesday 27th . Brother Stephan brought the big red outside doors to Moncton, in hopes that they can be saved from water damage. It may be necessary to replace them, though they are not old. Father Bede went along, and they visited Brother Henry.

Wednesday 28th. Late August mornings, with colorful sky, are like an invitation to something more. At Mass, the schola has switched back to what was once the practice here, returning to the stalls after the collect, rather than staying at the organ until after the Gospel.

Thursday, August 29th.An author is spending a few quiet days here, putting the finishing touches on a new book. We had a good rain today, lasting most of the day, and this evening the crickets were voicing their approval.

Friday, August 30th. The rain yesterday caused hundreds of small dandelions to flower, today. At None, several young people turned up. They were seminarians returning to Saint Augustine’s in Toronto. Many ask about Brother Léo’s condition. He is resting easy, cheerfully, after a case of shingles followed by an infection, and he attends daily Mass.

Saturday, August 31st. As tomorrow is Sunday, Bede changed the first reading sheets in the folder for Vigils. He prints these out himself. On the third floor, the ‘west corner room’, which has been vacant since Father Clovis retired, is being prepared for use by a monk.