In the Sacred Night

Sunday 1st. It is a unique feeling to see neighbours rolling in, very early in the day, for the blessing of the Easter Fire leading up to Eucharist. Everyone in assistance seems more present; more implicated then. Father Bede presided, and for the homily, read Saint John Chrysostom’s Easter Homily: “Let no one mourn that he has fallen again and again; for forgiveness has risen from the grave.” Later in the day we celebrated Mass again, and the feeling of life and its mystery continued through the day.

Monday 2nd. In Chapter this morning, Brother Stephan asked us to look back through the just-past liturgical celebrations, and got our comments on how it went. This gave us the chance to talk about additional aspects of Easter 2018. Around the corner from the Chapter room was tacked a very nice Easter message from our neighbour, Mère Alfreda.

Tuesday 3rd. Early spring here is so nuanced that at times it seems there’s nothing in it; no spring. The crows seem to feel spring more than anyone, and they seem delighted when there is sun, as they glide among the big trees.

Wednesday 4th. This morning, there was a smell of turpentine downstairs, paint brushes being cleaned. Our technician was by and installed the new router. Brother Glic served him some coffee and a piece of Simone’s excellent Easter cake.  One of our neighbours finds it striking that a new superior will be named in a few days, or should be, and none of us knows who it will be. He says it’s like something from the movies.

Thursday 5th. The new router is working great, and the guesthouse in particular now receives a much more reasonable internet signal. Brother Henry welcomed friends at Mass in Dieppe this morning. One business man friend of his goes to Mass often at the residence, where the chapel is extended in size twice a week by sliding back the wall dividing it from the TV room / living room. At the very back, the kitchen and cafeteria are visible through a long window.

Friday 6th. Today, Brother Stephan finalised the sale of our dairy quota which means, we are getting out of dairy, as had been discussed and decided over the last several months. The last cows we’ll milk here will exit the parlor, then our barn, for good, the end of the month.

Saturday 7th. A starling swooped down to a snowmelt puddle and took a bath, another starling followed, then several. Must feel good, after winter. The water filter in our refectory is now redone, and up and running. John is by, working on the fluorescent lights in the kitchen.

Sunday 8th. The ice at the edge of the long drive has more or less melted, thankfully. The drive was very smooth and slippery recently.  We’ve opened the box of the 600 gram chocolate squirrel, Easter treat from Mistassini. It’s a big squirrel. And all week I’ve been thinking: that squirrel doesn’t know what’s ahead of it. On the box is a striking, digitally-drawn Trappist monk, one of a series of monks they invented to put on their boxes. Does this help sell? The happy monks each embody some of the humility and fun of being a monk.

Monday 9th. Today we celebrated the Solemnity of the Annunciation, postponed from Palm Sunday March 25th, and after Mass congratulated Bede on the 15th anniversary of his Abbatial blessing, which boasted nice guests from Coalville and beyond. Just before afternoon work, Father Innocent and Brother Stephan were discussing an exhaust upgrade for the greenhouse, whose wood stove is more-than-retro.

Tuesday 10th. In Chapter, Steve outlined the month in dairy, which he has orchestrated well. Our exit from dairy. On two successive Thursdays, auctioneers will arrive and take away cattle, the last night being April 26th.

Wednesday 11th. The milking parlour has high windows: lights on at night for milking, timered lights in the rest of the barn, it’s pretty. It’ll be strange not to see that. But it won’t be the first time lights have gone out for us…or on. The racoons were on heavy prowl a few hours before dawn, sniffing, sniffing. They seem almost like different animals when they re-appear, famished, in the spring.

Thursday 12th. Because we are making changes to the dairy, rumors have begun spreading that other changes are happening, which are not. I suppose everyone feels the same about their town, but the speed with which rumor becomes fact in Rogersville seems without compare.

Friday 13th. Steve posted the notice of the farm equipment auction which will follow the sale of the cattle. In May, equipment will be lined up along the long country road north of and parallel to the monastery. Internet bidding will be possible. Over 125 auction lots, professional auctioneer company. From Fredericton.

Saturday 14th. Steve posted the schedule for Dom Clément and Dom Raphaël’s visit, starting tomorrow. It is well-organised for a short visit / short visits. The new superior will be named by Clément in Chapter after Lauds Tuesday.

Sunday 15th. We had a nice meal together with our two visitors and heard a bit about the fire the monastery of Rougemont experienced last year. It affected their apple orchard operation especially, though they also lost for example the foundation cross; when a monastery is founded, the founders bring a cross with them. Ours is in a little reliquary in the scriptorium. 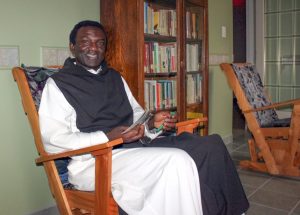 Monday 16th. With a long ice storm on the cards for the Province, and beyond, Dom Raphaël decided to cut short his visit and head north, to Campbellton. Happily, he did have time to say Mass at the Sisters. If only he could have remained for lunch there. Campbellton has the look of a town that’s become economically depressed. At the same time there is a fresh feel to the place, which is pleasantly situated.

Tuesday 17th. There was a renewed élan to things as we gathered for Lauds, then headed into Chapter. Dom Clément read out to us an announcement of, and brief, personal reflection on, the superior he has chosen to name, and this was Father Innocent Ugyeh. The last Ad Nutum here was Dom Maurice Guimond, in 1993. Maurice was then elected Abbot in 1995.

Wednesday 18th. The snow banks are retreating, little by little, from the brick walls. As one of the younger farmhands celebrated his birthday and looked forward to trying out a brand-new gun, the transport truck arrived to take the heifers to auction; so that is one barn down, one to go. The next step will be cleaning and sanitising the heifer barn, which’ll be used by another farmer, who’s leasing it.

Thursday 19th. Maurice has been cleaning the ventilation grill in the kitchen, and that takes a lot of Easy Off. Father Roger dropped by the now-empty heifer barn and showed them some of the disinfectants we use in the chicken barn between flocks.

Friday 20th. A humorous Acadian Parish Priest we know well was by: it isn’t the only way of being a Priest, but some Acadian Priests’ being humorous reaches people, confirming what their own good nature is telling them. Dom Innocent gave his first Chapter, and did it with a smile, and some important words. He mentioned the fast-upcoming regional meeting of Superiors which it is our turn to host this time out. One of the invitees will be a Superior from France. The US are invited as a matter of course, but available French speaking American Superiors are rare.A bull born a few days ago has become a foster father. A cat had her kittens in his hutch, where they are nestled in the straw in a corner.

Saturday 21st. Exchanging a few words with the farm hands, one realises we won’t have the chance to share their lives in quite the same way much longer.

Sunday 22nd.T his afternoon Rémi and Roger, the Dynamic Duo of farmhands, diligently emptied last year’s silage from the bunkers into a long, open-topped truck, for sale. 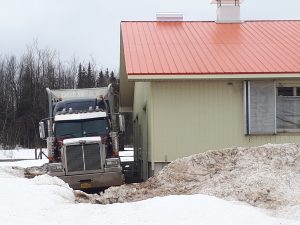 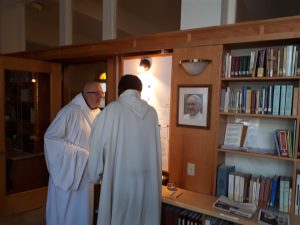 Monday 23rd.  With just a little dark water showing on the frozen lake, we seem to have turned a corner towards real springtime. In the barn, there’s a different smell once just a bit of warm air arrives, the sweetness of the hay comes out, and as it were life mobilises.

Tuesday 24th. A last-minute, unexpected news blitz occurred: guess word got around we were leaving dairy. Brother Stephan spent a good part of the day welcoming various media crews, and speaking to them, being filmed, recorded. Plus they’re coming back tomorrow.

Wednesday 25th. Dom Innocent made his way to Richibucto to see a fellow about vines today, bringing back one vine which’ll produce wine grapes; another, eating grapes. In the evening he attended his first Chamber of Commerce meeting in Rogersville, seeing some familiar faces from town.

Steve began the night milking a bit early. After this, the main barn’s cows left in big trucks for the auctioneers’ in Truro, Nova Scotia. The young truck drivers had a strong Nova Scotia accent, nice to hear. Stephan followed on to Truro to attend the auction, returning here on Friday. By this evening, the dismantling of the milking parlor was well under way.

Friday 27th. The empty calf hutches are now being pressure-washed for eventual re-sale, some of them are lined up along the road. Barn cats remain. Some say we’ll have to keep cats going in the de-commissioned barn, otherwise it will be overrun with vermin.

Father Bede was working on a homily today for the sisters tomorrow, he’ll be filling in a few days while Father Clovis is away.

Sunday 29th. Someone sent Brother Stephan a poem she’d written about leaving dairy farming. It’s good. The change has elicited interest, near and far. Some wonder about our feelings. Some wonder about the money. Some are fascinated by the process, the different steps.

Monday 30th. Interesting folks are making their way out back now and then, in their car or truck, I guess they are involved with or interested in the big farm equipment auction Saturday. Our manure spreader is up, ten-ton grain tanks, crop sprayer, a few tractors, many small pieces: close to two hundred bidding lots in all. 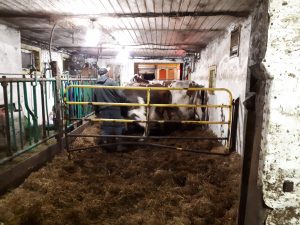 Departure of the Cows 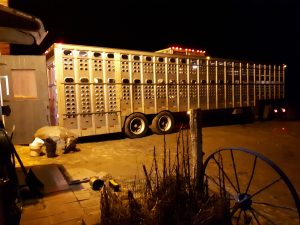 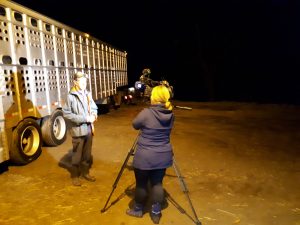 Silage being trucked away.